Like a kid who has gone off to college, Year of No Sugar has gone off into the world and is having all kinds of adventures. Sometimes I just get to hear about them, like when my agent calls up to say “Congratulations! YONS is being translated into Chinese!”

Other times, it shows up on our doorstep, like this past Sunday. All day we had a cameraman and interviewer from a Russian television show follow us around, filming us chatting at the Farmer’s Market, shopping at the supermarket, cooking at home.

Talking about the “S” word with Sergey and Egor

I was amazed and delighted that 2-3 million Russians are interested to find out about our family and our adventures not eating sugar. And I was dismayed to learn that this is, at least in part, because Americans aren’t the only ones suffering from excess sugar intake. According to our interviewer Sergey, Russians suffer from a holdover mentality of deprivation, (much like Americans who survived the Great Depression I imagine). During the time of the USSR, he told me, it was difficult to find foods that were “tasty.”

“Now, even though things are readily available,” he told me, “When they find something good, the tendency is to always take it- and a lot of it.” For example, he said his wife almost never leaves the house with their five-year-old son without buying him an ice cream- even if he doesn’t ask for it. Sometimes, he says, his son will want the ice cream mainly for the free toy that comes with it.

When questioned about this, Sergey’s wife responded “Don’t take away his fun of being a kid!”

So you see, we Americans don’t have a corner on the unnecessary sugar market, or the unfair marketing to kids market, or even on the parental guilt market either. Unfortunately, despite cultural differences, the language of Too Much Sugar is one more and more countries are becoming are all too fluent in. And the “Western diseases” that come with excess sugar consumption- from diabetes, obesity and metabolic syndrome to heart disease, hypertension and liver disease- are becoming “Everyone Diseases” instead. The other day I read an article about the epidemic of obesity in Africa. http://www.theguardian.com/society/the-shape-we-are-in-blog/2014/jul/07/obesity-nigeria 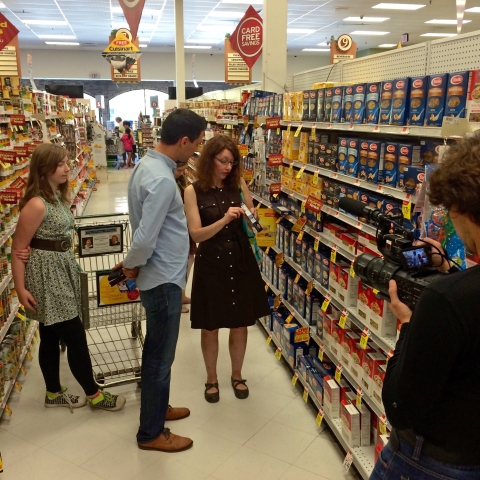 We invade the supermarket for a sugar treasure hunt

You know you have to rethink the problem of obesity when you realize it so easily coexists with malnutrition. Sugar used to be so expensive that one of the diseases it caused (gout) was known as the “rich man’s disease.” Now, sugar is so cheap that poor people around the world are subsisting on it instead of actual food. They are at once malnourished and obese.

So, as Americans export our fantastic way of eating (processed, packaged, fake and fast foods), what happens? In Japan, men’s obesity rates are up by 100%. China now has the second largest number of obese people after the US. In Israel, 50% of adults are overweight. http://www.ynetnews.com/articles/0,7340,L-4491919,00.html

Are you scared yet? Kinda makes you look at that Coke can with your name on it another way, doesn’t it?

But it also makes me understand why it’s not just an American conversation anymore: it’s an Everyone Conversation. The Chinese version of Year of No Sugar will appear next year, (August 31, 2015); and a Hebrew translation is being made for Israeli release, (TBA). Sergey and Egor will be telling our story in Russia, (airs this November). And, in English, there’s now an audio version of the book as well. http://www.amazon.com/Year-No-Sugar-Memoir/dp/B00KSLH9N2/ref=tmm_aud_swatch_0?_encoding=UTF8&sr=8-1&qid=1412168145 It’s exciting for me to know Year of No Sugar can be perhaps a tiny, little part of trying to push this global pandemic back in the other direction.

So have fun Year of No Sugar! Take good care of yourself. But don’t forget to send me a postcard- you know how I worry.

§ 2 Responses to The Wild Blue Yonder

You are currently reading The Wild Blue Yonder at Eve O. Schaub.