Nobody Wants Your Potato Chip Bags Except Subaru and Mister Fezziwig

So. How on earth do you recycle a potato chip bag?

You’d think there’d be more good ideas out there, given how all over the place potato chips are, but no. A website called ThriftyFun recommends using them to “bury your deceased pet parakeet, fish, gerbils or hamster.” But once you’ve said a fond farewell to Kiwi, Bubbles, Biscuit and Mister Fezziwig, what else can you do?

Which is where the Subaru Loves the Earth recycling program could come in.

The idea is a simple one: think of all the single use disposable items you might use in a waiting room— a coffee cup, a chip bag or snack wrapper, some creamer capsules. Now imagine they all will be recycled.

I should point out that most of these items aren’t normally recyclable at all, even through single stream recycling, so this is kind of a big deal.

Here’s how it works: in their customer waiting area, participating Subaru dealers feature three tall, collection boxes: disposable cups, lids and straws go in Box 1, candy chip and snack wrappers go in Box 2, and coffee and creamer capsules go in Box 3. There’s also a display illustrating what happens to these items in the recycling process. 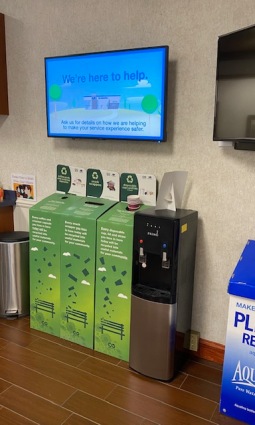 My dealership waiting area… You kind of can’t miss it

But the best part about the program? Is that it works.

I know this because Eric Lendrum, who I got on the phone, is the owner of North Country Subaru. He is JUST the person to ask about the Subaru Loves the Earth program, because he has a lot to say.

“We’ve always had a recycling bin, but it was obvious people didn’t seem to really care,” Lendrum says. People would often throw everything unsorted into the trash, even when the recycling bin was only inches away. Now? His customers are recycling. He credits the success of Subaru Loves the Earth with Terracycle’s eye-catching display, coupled with what he calls “repeat service”: he says customers who come back over time become acclimated to the Terracycle system and use it more; some have even started saving K-cups and wrappers to bring from home when they have a service appointment. They get to be “regulars” of the system.

“It used to take weeks to fill those boxes up,” he says, “now it takes days.”

Lendrum readily acknowledges it would be better if people didn’t use single use products at all, but says that, as a dealership subject to safety regulations and requirements, getting away from single use items is, “frankly kind of impossible.” And the expectations of customers play into it as well. People just don’t want to pour themselves coffee from a big communal pot anymore.

Lendrum sees this Subaru-Terracycle partnership as a step in the right direction, educating customers at the same time as contributing to a good cause: all the plastics that Subaru dealerships mail in to Terracycle get transformed into public park equipment. 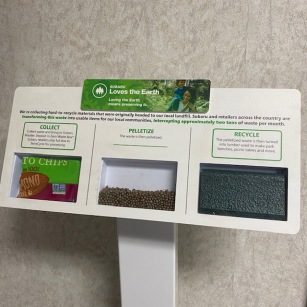 “More garbage turned into less garbage is- I don’t care who you are- a good thing,” he says.

It all started three years ago at the annual Subaru conference at which Tom Szaky, founder of Terracycle, gave the keynote presentation.

“He’s a really interesting guy,” Lendrum says. And the pitch was a compelling one: dealerships who signed up for the new program got starter kits and had their first shipment subsidized. For a company like Subaru, whose brand is so strongly linked to environmentalism, it seemed like a perfect fit.

It occurs to me that when I recently was agonizing over whether or not to fix my aging Subaru, I had fixated on the fact that I was driving a machine fueled by greenhouse-gas-promoting fossil fuel, but it hadn’t occurred to me to consider the way Subaru acts as a company, which might be just as important.

Sure, I knew Subaru marketed itself as a “green” company, but I honestly didn’t know a whole lot more than that. When I looked into it I learned that Subaru has had Zero Landfill Status in their Indiana manufacturing plant since 2004 and tested waste-reduction strategies in partnership with the National Parks Conservation Association at places like Yellowstone and Denali since 2015. According to Lendrum, they also spend a large chunk of each annual convention talking about sustainability.

Lendrum doesn’t think this is just for show. He says it is driven by a corporate mindset that is slow-moving, but passionate. Can a corporation be passionate? I wondered. But if Lendrum himself is any indication of Subaru’s character as a company, then you may just be convinced.

I say this because several minutes into the conversation Lendrum mentions that even more than preserving the environment, his biggest passion is helping children’s charities, and explains that in some ways he sees his dealership as a way to support good works. “This business has to survive or none of this can happen,” he says.

Later I learn that North Country Subaru is a family business: Eric co-owns it with his brother Jared, and both of them learned the business from their father, Ken. It occurs to me that the Lendrum family is a dying breed: the family owned business that knows and cares about its community, and gives back not because they are motivated by marketing, but because they believe it’s the right thing to do.

I point this out because I think all these issues are related: being a responsible steward of your community or environment means you aren’t going to mistreat or exploit it. It seems perfectly natural that a family-owned business like North Country Subaru would be very involved in their community, because they live here too. Similarly, we all need to take ownership of the environment, not thinking of it as some big overwhelming earth-scale problem no one can fix, but instead as us taking care of ourselves, our own families, our own communities.

Of course, like Terracycle itself, the Terracycle-Subaru program has limits.

For one thing, it’s expensive. Although the service is free to their customers, it’s not free for the dealership, who pays shipping and processing for each and every box headed back to Terracycle.

Plus, there’s the environmental footprint of shipping all this stuff around. Does that energy expenditure outweigh the benefit of keeping these materials out of the landfill? I don’t know how you figure that sort of thing out.

And of course, it’s extremely limited. It’s a Subaru program, and Subaru dealerships are where you will find these boxes. If you find yourself drinking coffee from a single use cup somewhere else? You are out of luck. You’ll be like my 15 year old who found herself wandering around the mall for hours unable to part with her disposable smoothie cup. (She brought it home.)

My dealership waiting area… You kind of can’t miss it

Participating dealerships are understandably a little wary about publicizing the program.

“I don’t want to be too well known for (it)!” Lendrum laughs, imagining carloads of recyclables appearing at the service-area’s doorstep. “We’re just not prepared for it… That would be a wonderful problem but I’d like to grow into that.” For now he says their customers are welcome to bring items from home, but that’s pretty much all they can reasonably handle.

Just for the record, I find nothing in any of the descriptive material from either Terracycle or Subaru that limits the program to customers. So, you know, if you just happen to live next door to a participating Subaru dealership, and you are brave enough to walk in with a handful of K-cups and snack wrappers, let me know how that works out. 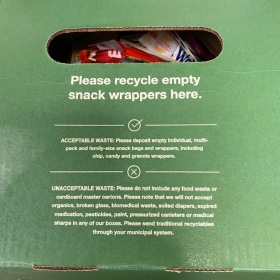 For my part, I get all freaked out bringing my garbage to some public place where I may have to stand around for a few seconds being mistaken for a person who is inordinately fond of garbage, or perhaps got lost on her way to the dump. Even though I am a North Country Subaru customer, and even though Eric Lendrum has given me express permission to bring a reasonable amount of my recycling in, I’m still reluctant to do it. I don’t even really know why.

Wait. Yes I do: I’m afraid to look stupid. That’s probably the third drawback to changing behavior through a program like this: comfort level. There are always those of us who are terrified to make a mistake, to look stupid, to feel stupid.

Despite all these drawbacks, Lendrum sees the Terracycle concept as a stepping-stone, a means to an end. Even if the overall impact is relatively small, its intent is to get people thinking, and acting, differently. To push them past that “I feel stupid” part. The next challenge, he says, is making a process like this more streamlined and available in more places, like your local coffee shop for instance.

“You’ve gotta crawl before you walk,” he says.

So I’ll be heading over to Subaru with a collection of empty potato chip bags very soon. If anyone looks at me funny, I’ll just do my best impression of the dear, departed Mister Fezziwig. Works every time.

You are currently reading Nobody Wants Your Potato Chip Bags Except Subaru and Mister Fezziwig at Eve O. Schaub.