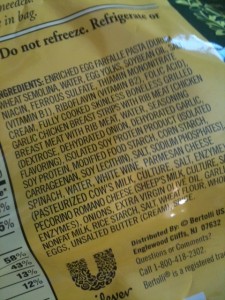 “So we are being poisoned by this stuff and its been added surruptitiously to all of our food; every processed food.”

You’d think it’d be simple to exclude sugar from your diet, right? Not easy perhaps, but at least reasonably simple. You wouldn’t have to be an Einstein. Just look at the ingredients, and then when you find sugar- don’t eat it. Simple.Yet lately I’ve been running into some ingredients that have been defying my supposedly fool-proof plan. Dextrose for one.

Flashback to last week: for several days I wasn’t feeling so well, and as a result I was behind: behind on my cooking, behind on my shopping, behind on my meal-planning. Somehow we muddled through, but one night when I was feeling particularly desperate, half-ill and starving, I hauled out an industrial size bag of frozen “Bertolli” chicken with cream sauce and bowtie pasta. Okay, the ingredient list was longer than my arm, and appeared to have been at least partially written in some unknown foreign language, but this was a food emergency. At least there was no sugar; I had purchased this on my first “no sugar” BJ’s run a few weeks ago.

Of course, silly me had to double check, which as we have already thus far learned can be a big mistake if you’d like to actually eat anytime in the near future. What I found was within the chicken ingredients of meat, water and seasoning, the first sub-ingredient under “seasoning” was: “dextrose.” Dextrose? %^&*#$!

So you know what? I felt crappy. I was starving. And there was pretty much nothing else in the kitchen at that moment that seemed even remotely appealing. I cut open the bag, dumped it into the non-stick pan, cooked it for the requisite ten minutes and we ate it anyway… dextrose or no dextrose.

Upon completing our meal my first thought was that something was amiss- what was it? I realized it seemed really odd to me how quickly our meal had come together- I mean, a meal like chicken and bow-tie pasta with spinach and cream sauce doesn’t just happen all by itself! How long would a recipe like that normally take me? At least an hour but very likely more, not to mention all the dirty dishes that would result from washing spinach, separately cooking chicken, carefully simmering the cream sauce in a pan while boiling the pasta in another pot.

So it occurred to me that this meal had been sponsored: brought to you by dextrose! (As well as its friends isolated soy protein product and sodium phosphate!) The inverse correlation was very clear: the fewer chemicals and additives, the greater amount of meal prep/ cooking and clean-up time, and vice versa.

But it had also become clear to me that there are so many pseudonyms for sugar and it’s variants that I need to do some homework. When I look up “dextrose” on the internet I find a host of confusing answers: “Better known today as glucose, this sugar is the chief source of energy in the body.” While another advertisers hail dextrose powder as “Corn sugar!” that is “30% less sweet than pure or refined sugar.” So, forgive me for being dense, but which is it? Is it something that we create in our bodies to provide energy, or is it an added sugar?

True confessions time: biochemistry was not my best subject. Can you tell? So what is sugar? What are the differences between terms like sucrose, glucose and fructose? And where the heck does dextrose come in? Are all “ose” words sugar-related? What about bellicose? Today I happened upon a website of diabetes information that listed a frightening amount of “reduced calorie sweeteners” to look out for, without so much as an “-ose” ending to tip us off:

Am I the only one who is starting to break out in a sweat just trying to define “sugar” in a list of ingredients? Probably. I don’t know too many other people who would worry whether their food contained isomalt or not.

It’s clear to me that sometimes I’m splitting hairs, because I have to. I put back a box of cereal in the supermarket because it contains “two percent or less” of molasses or cane syrup, and yet how sure am I really that the waitress in the restaurant knows there is no sugar in the tortillas? Did she check for isomalt? Or xylitol? Of course not.

So I’m off to watch Dr. Lustig’s talk “Sugar: the Bitter Truth” for the third time, in hopes of decoding the mystery of the “-ose.”

You are currently reading A Year of No Sugar: Post 22 at Eve O. Schaub.