Do you remember that movie The Incredible Shrinking Woman, starring Lily Tomlin? I saw it when it came out- I must’ve been about twelve. The movie’s premise is that suburban housewife Pat Kramer (Tomlin) gets exposed to some experimental chemicals and consequently begins to shrink: she shrinks to her children’s size, and later she is living in her children’s dollhouse. Kramer ultimately shrinks to microscopic size, landing in a puddle of household chemicals, which- luckily!- cause her to begin to grow again.

The last scene of the movie is of Kramer, at her normal size, looking down to see her shoe splitting open. Kramer and the audience realize at the same moment… now, she is continuing to grow.

This movie scared the crap out of me as a kid.

Thirty years later, instead of watching Lily Tomlin get chased by mad scientists, I can scare myself silly by simply reading about actual chemicals in our environment to which we are exposed each and every day: Phthalates, Bisphenol A (BPA), Triclosan, Mercury, Teflon, Brominated Flame Retardants (PCBs, PBBs, PDBEs) and Pesticides (DDT and 2,4-D). 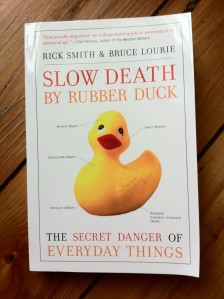 Recently I finished Slow Death by Rubber Duck, which is all about the chemical soup in which we collectively marinate as a society. But authors Rick Smith and Bruce Lourie go one better than just writing about the omnipresence of these chemicals in our everyday environment- they also chose to experiment on themselves. Over the course of a few days they exposed themselves to “normal” levels of common everyday chemicals to see what levels of them would later be traceable in their blood and urine (such as eating a tuna fish sandwich or sitting on a stain-resistant couch). The implications of what they found are perhaps even more scary than the prospect of shrinking to the size of a molecule on your own kitchen floor.

“But, wait a minute” you say, “what does this all have to do with sugar?”

Well, I’ll tell you. While reading Rubber Duck, it struck me that there are many points of similarity between the runaway proliferation of chemicals and that of sugar, namely:

It begs the question: do we have to go live under a rock to escape the health hazards of modern life? I mean, I’m starting to feel a little surrounded here. Sometimes it seems to me that the price of being a member of contemporary society is, knowingly or not, to put our very lives on a roulette wheel.

After reading Rubber Duck, my husband and I were inspired to get rid of our Teflon pans and replace them with a non-Teflon alternative. At the nearby kitchen store we were sold some pricey “Swiss Diamond” pans which were promoted to us by the salesperson as a great non-stick alternative to Teflon.

Later I wondered why, however, the literature that came with the pans was very careful to avoid saying the pans were Teflon-free. Wouldn’t that be a selling point? Something was fishy in Denmark… or perhaps Sweden.

After some online research the truth came out: Teflon by any other name… is still Teflon. PFOA is what they use to bond to the diamond in the Swiss Diamond pans. Which is… Teflon. Under its non-trademark name.

So here’s my question: why is it that we, non-chemistry majors most of us, are required to sleuth out that “PFOA” is the same thing as Teflon, and that “fragrance” is code for pthalates, that juice is just as bad for you as soda and that sugar is what is making people fat, not fat? Whenever I find out one of these things for the first time, my first reaction is always the same: why didn’t somebody tell me this sooner?? Why don’t more people know this? There are plenty of people being paid very well to argue that the status quo is fine, but is there really no one out there looking out for us? Who is our lobbyist?

In the end, even though the fake-No-Teflon pans had been used, we explained the situation and the kitchen store nicely allowed us to return them for store credit. This we promptly used to buy a large cast iron pan, the kind great-grandma would’ve used. It’s huge, requires some special cleaning instructions (No soap! Special scrub-brush! Dry immediately to avoid rust!) and is incredibly heavy. It isn’t what most people would consider “convenient” in our no-muss, no-fuss, flame-retardant, lavender-scented and oh-so-sweet world. But you know what? I’m starting to think that convenience is in the eye of the beholder.

You are currently reading A Year Of No Sugar: Post 82 at Eve O. Schaub.