What Rhymes With Chocolate? 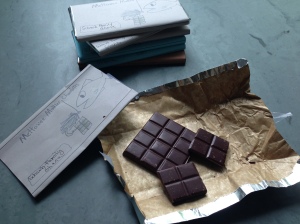 Can we talk about chocolate? First of all I’ve discovered that, apparently nothing rhymes with it. According to the unerring wisdom of the Internet, it rhymes with charming words like “slut,” “butt,” “gut” and “mutt.” This is probably why we don’t see any chocolate candy bars with cute rhyming names because they’d have to be something like: “Glutbutt’s Chocolate Nutty Sluts”!

But we all know chocolate doesn’t really rhyme with “nut,” because if it did we’d pronounce it “choc-LUT,” as opposed to “choc-LET.” (My computer goes on to insist that chocolate also rhymes with blanket, beechnut, carrot and zealot. My computer is, apparently, a moron.)

It seems nothing really rhymes with chocolate. Likewise, nothing really can take its place. During our Year of No Sugar I found lots of sugar replacement strategies that worked great, or at least pretty well. I managed to make banana ice cream, shortbread, brownies and coconut cake all of which passed effortlessly for sugar-containing (read: fructose-containing) treats.

But not chocolate. Chocolate, we came to realize during that sugar-free year, was the one thing we simply could not have, or even approximate.

Now, this isn’t to say there aren’t plenty of “Sugar Free,” chocolates on the market to choose from, but in the marketplace “Sugar Free” usually means traditional sugar has been replaced with one of two things:

Because of reported possible side effects ranging anywhere from gastric distress to infertility and cancer, our family chose to away from both of these categories as well. So “Sugar Free” chocolate was also out.

Instead, we fed our inner chocolate lover with baked goods made with unsweetened cocoa. And those were good, often really quite good. But nothing ever came close to replicating the experience of a bite of actual, snap-when-you-bite, melt-in-your-mouth chocolate. Accordingly, at the end of our Year of No Sugar, when we all chose a special treat to have at midnight- what did I choose? A Reese’s Peanut Butter cup. Ahhhh- chocolate at last.

Now I’ve been down this road before. Similar to chocolate, sugar has some unique, magical properties that can’t always be replicated. Not only does sugar sweeten, but it also preserves, it thickens, it fills, it transforms things from one state to another. Therefore, using an alternative ingredient in sugar’s place may meet one need of the recipe, but not another. Exhibit A: Dextrose Jelly. In my book, Year of No Sugar, I tell the story of how I tried to make Concord Grape Jelly using dextrose in place of sugar, but suffice it to say that (spoiler alert!) I ended up with quite a few jars of an only just passable grape sauce instead.

Nevertheless, in the case of chocolate, my friends Tom and Robin were game to try. So one day recently I arrived at their home armed with my beach-ball-sized, orange, plastic barrel o’ dextrose.

Let me just say right now: making your own chocolate is unbelievably complicated. It’s the kind of thing that’s so convoluted that half-way through you begin to wonder how on earth it ever got invented in the first place. It’s not the kind of thing I would do to relax in my free time at home, any more than I would choose to build a particle accelerator out of matchsticks and used chewing gum in my backyard. But nonetheless this is Tom’s hobby.

Tom began by taking cacao beans he had already roasted and running them through a Champion juicer. Immediately, I was in out of my depth. Tom was talking about “volatiles” and “acetic acid” and “particles below 20 microns.” There was vocabulary, which being a word-person I can handle, but there was also lots of chemistry, which, being a word-person, makes me vaguely nauseous.

I tried to keep up. After grinding, the cacao bean “nibs” are separated from the husks via a complicated winnowing apparatus known as Tom’s hairdryer. Then back into the juicer they go, for a second grinding, which turns the nibs into a cocoa “liquor,” a rich-looking brown paste. The paste then gets ground by another specialized machine- a “melanger”- which refines all the grains down to a smooth consistency. 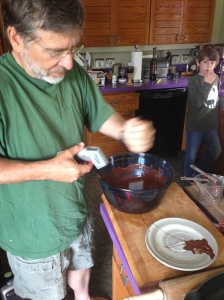 Then came an important moment- the step in which we would add the dextrose powder in place of sugar. But when we did, Tom was not pleased with whatever was happening in the melanger. He wondered aloud whether the mixture would “seize,” which definitely sounded like a bad thing, and made repeated frowning faces into the revolving mixer.

“How does it taste?” Robin asked when he sampled some.

“Not very good,” he said matter-of-factly.

At this point I was quietly fearing for the life of the Dextrose Chocolate, who without warning was now under 24 hour surveillance in the chocolate ICU. Doctor Tom didn’t seem to like its chances for survival, and even if the patient survived, I wondered: what kind of quality of life could it possibly hope for as a chocolate that doesn’t taste good? And who does one contact to administer last rites to a blob of cocoa paste?

It would be awhile before we found out the answers to these questions: the melanging step lasts hours– I came back the next day for the final steps, which included “tempering” the now super-smooth paste by heating it in the microwave to exactly 120 degrees. Once the correct temperature is reached, you quickly reduce the temperature to 81 degrees. This is accomplished by spreading some of the paste on a marble slab and working it back and forth with a spackle thingy. (That’s a technical term.)

Patiently, Tom smoothed the chocolatey blob back and forth like the world’s most delicious wall plaster until he could tell from experience it was ready to “seed” the rest of the batch. Tom was talking about the four different types of butterfat crystals and the fact that the time-length for heating is not linear because of the changing crystal structure. He also said, and I quote, that “chocolate is a non-Newtonian liquid.” If you figure out what this means, please do not tell me.

Then back to the microwave! Are you with me? Now that the correct chemical whatzit had been reached we wanted to reliquify our chocolate to allow for spreading it into the bar molds. After this was accomplished, Tom checked carefully for evidence of any “bloom” which would’ve required the tempering process be done all over again. Incidentally, this is the point at which many chocolate makers kill themselves.

So do you want the good news or the great news? The good news is that the chocolate worked– the consistency was right, the liquid turned into actual, snap-able bars, tempered properly with no bloom and everything. The better news? It’s not only good- it tastes like… chocolate! Real chocolate! After licking one of the spoons used to portion the bars, Greta was fully prepared to arm-wrestle Robin for dibs on the spatula. It was very dark, yes, less sweet, yes. But no weird aftertaste, no “gastric distress.” There’s no fructose in sight and yet- it is nonetheless, undeniably real chocolate.

Who would’ve guessed that chocolate might rhyme with… dextrose? I mean, besides my computer.

You are currently browsing entries tagged with no sugar chocolate bar at Eve O. Schaub.