There’s a Crazy Lady in the Kitchen

Steve walked into the kitchen today as I sat in the middle of what most people would call a pile of garbage, and asked “What are you doing?”

“Oh, okay.” he said, walking back out again.

There was a pause before I called after him, “Do you think I’m crazy?”

I love my husband. 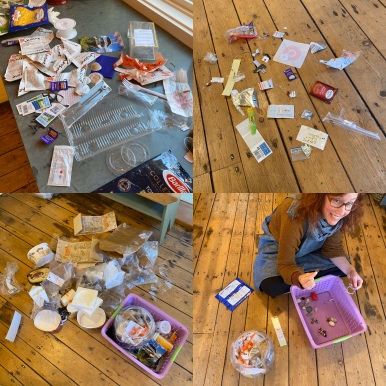 Hiding it all under the bed suddenly seems like a very viable option.

Of course, I wasn’t sitting in a pile of garbage, because in our house garbage doesn’t exist. Instead I was sitting in the middle of a whole bunch of items we no longer want or need, and now have to figure out exactly what to do with.

Although I was having fun sorting all my non-treasure into piles, it had all started because I had gotten angry. Earlier that morning, in the back of a cabinet, I had come across some ancient, expired boxes of yogurt starter and what normally would have been a two-second flip over my shoulder into the garbage can turned into twenty minutes of me opening each individual foil packet and dumping the powder into our compost, all the while fuming that the foil packages were going to be The Next Problem. Because foil/paper packages are designed to be garbage and nothing else; there is no second life for expired packages of yogurt starter. As I sat there getting yogurt starter powder on my feet and all over the floor I imagined a conversation with the yogurt company that began with me yelling at the folks in the packaging science department.

EXACTLY WHAT are we supposed to do with these after they are used? What do you mean you don’t have a plan? These are just supposed to go sit in an airless, non-decomposing hole for the rest of ETERNITY- is that it? That’s your brilliant solution??

Ah, the poor yogurt starter people. After imagining yelling at them I felt kind of bad about it. Making yogurt starter is a noble profession, and one which enables people to use less packaging in other ways, since they’re making homemade yogurt and not buying those packages, after all.

It’s just that I can’t figure our why on earth the world wide packaging industry is allowed to make things that we have no plan for after their initial use is done. It’s like this giant invisible loophole in our produce-and-consume economy that no one wants to talk about.

And as I wondered about this I was inspired to proceed to the recycling corner of my kitchen and angrily dump out onto the floor the three successive containers of “I don’t know” that I’ve accumulated over the past ten weeks. Surveying the devastation, certain key themes emerged, but one reigned supreme.

Multilayers. By this I mean extruded combinations of paper, foil and/or plastic. Multilayers are almost always pure, unadulterated landfill fodder and have now arisen as the bane of my existence. Frozen food packaging, plasticized produce tags, pull-off seals, stickers, tickets and receipts are among the items that show up repeatedly in my big pile. All of them are multilayers.

It’s hard not to look at this depressing pile and think of the zero-wasters online explaining how all their garbage for the year fits into a thimble. I remind myself for the frillionth time that we’re learning as we go. I make a resolution to attend the farmers market more, so to avoid things like vegetable tags and frozen food wrappers. I vow to redouble my efforts on the “No receipt please!” front, without actually screaming at anyone, although it is difficult when so many places don’t ask if you want a receipt- they just hand it to you. I know it sounds odd, but sometimes I just don’t have the heart to tell them I don’t want it. I need to get better about that.

Lastly, I ‘m tempted to call the information hotline for these multilayer-wrapped products and ask whoever answers the phone, What do I do with this?

I’m pretty sure the response I’d get is a confused, What do you mean? Throw it away!

Then I’d go back to my yogurt-starter-tirade and tell them:

Don’t you know there is no such thing as “away”?

You are currently browsing entries tagged with nonrecyclables at Eve O. Schaub.