In Search of the Great Intergalactic Space Plastic Solution

Last night, I dreamed I had invented a way to turn clear plastic wrapping into food. I had made a lovely plastic salad that looked like transparent coleslaw. Fortunately I woke up before eating it.

The kitchen is getting… interesting.

Probably this is because one of the concessions the current pandemic has wangled from me is that, I’m not really able to avoid plastic in the manner to which I had become accustomed only a few short weeks ago when this project began. Cheese and meat are the big offenders: my butcher now operates on a “call us and we set it aside for you in lovely vacuum-sealed packages” system and in the interest of limiting shopping trips we visit the supermarket once per week and not the smaller stores that are happy to let us bring our own containers and beeswrap for cheese.

In the grand scheme of illness and hospitalizations, is it important that I can’t stick to my guns as much as I’d like? No. Nevertheless, I’m a rather hopelessly stubborn person, so it’s hard not to feel like I’m somehow failing as I slice open yet another plastic package, (sigh) admitting that at least for the moment I’m in some ways choosing the higher priority of keeping the family happily fed over a family project about the health of the planet.

But I’m not giving up. So I dutifully wash and air-dry each and every plastic package, determined to adhere to my No Garbage pledge: plastic it is, yes. However this plastic, at least, is not landfill bound. But where is it bound? And, by the way could we answer this soon, because the recycling corner of my kitchen, as my husband Steve has been quick to point out, is beginning to look more like a Krakatoa composed of plastic wrappers?

The Problem: WHAT IS IT?

I began by investigating the vacuum pouches meat often comes in. A few months ago we purchased a half a pig for our freezer from a local farmer and it was all packaged this way. I wanted to know: What kind of plastic is this and is it recyclable? I asked the farmer, my friend Rico, who didn’t know, but directed me to the local facility who had processed the meat: Locust Grove Farm. Locust Grove Farm didn’t know, but directed me to their wrapping supplier: the Teri Equipment Company. I called the Teri Equipment Company and they didn’t know, but they directed me to their supplier: UltraSource. Is this starting to sound like one of those circular nursery rhymes where at the end you go right back to the beginning?

But no, at last I got C’eria (pronounced “Sierra”) from UltraSource on the phone who was working from home as evidenced by the baby sounds in the background. And wonderful C’eria solved my problem because she was happy to send me the spec sheet on the plastics used in their vacuum seal plastic.

That’s the good news. The bad news was that, even though vacuum seal plastic looks like it could very well be made of one kind of material, it is in fact made of a whole buffet of different kinds of plastic, including: polyethylene (which can either be plastic #2 or 4), polypropylene (#5), ethylene vinyl alcohol, and ethylene vinyl acetate, (which as far as I can tell both fall into the “other” category.)

These materials are sandwiched together, what they call “co-extruded,” resulting in something called “Multi-Film,” although I think a much better name would have been Intergalactic Space Plastic. (They should really put writers in charge of all naming things.) And the problem with co-extrusion, as I’ve touched on previously, is that different materials that have been scientifically smooshed together are Very Bad for recycling, because most of the time it is too costly or difficult to un-smoosh them, and so no one does it. Voila! Intergalactic Space Plastic becomes landfill fodder for all time. 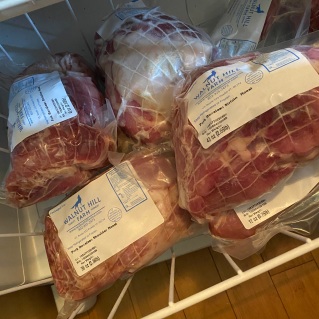 You’d never know I was a 20 year vegetarian, would you?

Doing a cursory online search of the properties of each of the different materials I could see that each plastic lent a different property to the overall wrapping material, and I’m sure if I were a Packaging Science major I could tell you much more about how amazing the invention of co-extruded, multi-film packaging is, and all of that would be true. Before the Year of No Garbage, did I love that I could buy a package of lovely, sealed, organic ground beef at the supermarket that would keep good for much, MUCH longer than other, mere mortal organic ground beef? Of course– it’s convenient and efficient. It saves waste and money. Longer shelf-life probably even made my supermarket more likely to carry organic meat in the first place.

But where Space Plastic saves waste of food it creates waste of something arguably even worse: permanent, forever garbage. At least wasted food can degrade back into the environment.

On top of that we have our bodies to think of: how much of these different plastics leaches into our meat and ends up in our bodies? I don’t know about you, but I’m not too excited by the idea of becoming a human landfill for all these awesome science-y chemicals. BPA ,PVC, PFA and PFOAs have all gotten a lot of attention in recent years for being cancer-causing and endocrine disrupting, not to mention in the bloodstream of pretty much everybody (according to the CDC, 95% of Americans have PFAs in their bloodstream). Consequently they’ve been removed from much- but not all- food packaging. Does that mean we can assume what’s left is definitively safe? Or is it more likely just a matter of time before we understand what other bad things these chemicals may be doing?

It just seems to make the most sense to avoid plastic wrapping for food as much as possible. Bringing my own container to the butcher was working great until the pandemic caused them to prepackage everything for ordering customers. My butcher was so kind as to even offer to unpackage it when I arrived so I could still use my own containers, but as lovely as that offer was, I knew it just meant he would do the throwing away himself- it was just a loophole.

Nope. I’d have to find a home for this forlorn, unwanted, Super Space Plastic myself. 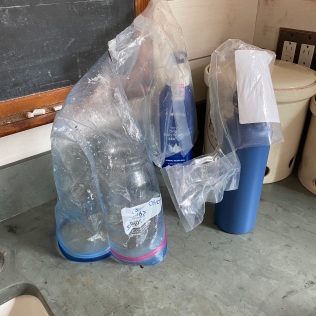 So far I’ve identified two promising options for my burgeoning Mount Everest of Meat Plastic. One is Terracycle, which is a private U.S. company that will recycle your hard-to-recycle stuff if you send it to them in the mail in a pre-paid box (read: expensive.) The other is Precious Plastic, which is an open-source alternative plastic recycling movement supported by grants and volunteers. (read: will I have to join a cult?) In both cases I suspect that my not-normally-recyclable multi-film plastics would be chipped, melted and molded into new recycled plastic products… but I don’t really know for sure. Which means it’s time to make more phone calls.

So stay tuned! Maybe I can make a new yoga mat out of all my old meat wrappers? Now if you’ll excuse me, I have to figure out something to make for lunch besides Plastic Salad. Pandemic cooking is one thing but that’s ridiculous.

You are currently reading In Search of the Great Intergalactic Space Plastic Solution at Eve O. Schaub.