The other day as we were driving home from school we somehow got on the subject of why our daughter Greta hasn’t written in her “No Sugar Project” journal lately. After a spate of great interest and productivity in the beginning, her writing book has been all but abandoned of late on her nightstand. I asked her: how come?

“Well, there’s nothing to write about,” she explained. “It’s like, it’s just normal now.”

There you have it folks. An eleven-year-old says not eating added sugar AT ALL with the exception of a once-per-month treat, can be normal. Let the record show that it took in the neighborhood of four months. 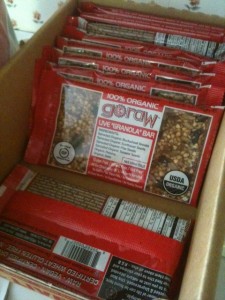 I know what you’re thinking- sure, anything can be normal if you do it long enough. You could wear balloon animal hats every night to dinner and after four months you wouldn’t even be hungry until a latex poodle was firmly situated across your brow.

That is true. However, I can identify with what Greta describes; after lots of flailing, I feel we’ve finally entered a groove of sorts now. We now know which products to buy at the supermarket and we head straight for them, do not pass go, do not collect two hundred dollars worth of sugar. We now know which special things we have to go further afield for and when we do, we stock up: Nature’s Market in Manchester is our connection for GoRaw ginger cookies and granola bars, and Applewood Farms organic sandwich meats. BJ’s Wholesale Club- which is a hike and a whole-morning venture- has freeze-dried fruit chips that are one of the few fruit snacks I have found not sweetened with fruit juice. These have been such a big hit with the kids that we dole them out like special treats. They also sell four pound boxes of a center-cut bacon that is the only commercial brand I’ve found without sweeteners. For something we use a lot of, such as tomato sauce or yellow mustard, after zeroing in brands that contain no sugar, we buy it in bulk and store excess on shelves in the pantry.

We’ve also been fortunate to be in a buying club of sorts- or rather to be buying buddies with- a nearby family who orders bulk organic produce every other week or so. Thus our refrigerator is regularly on the verge of exploding from the amount of broccoli heads and navel oranges I attempt to stuff into it. I can’t tell you how much of a difference this makes in my mind-set: knowing we have so much produce on-hand means I don’t think twice before popping a Fuji apple into everyone’s lunchbox or before carving up a few grapefruit for breakfast. I know it’ll be good, (reliably better than anything we can buy at the regular store) I know it’s organic, AND on top of everything else we’re paying bulk rates and saving money. If you see me and ask me about it- you won’t be able to shut me up about how awesome this is. You’ve been warned.

(Of course, I’ve had to learn our family’s own pace when it comes to produce consumption. Exhibit A: the fifty-pound box of potatoes that seemed like such a good idea until they started aggressively trying to plant themselves in the linoleum of my kitchen floor.)

I’ve also learned to become a bread-hoarder of epic proportions. Bread is an especially tough one: even organic, health food store brands like Vermont Bread Company usually have cane sugar or honey in them. We’re lucky to have a wonderful baker in our community- hello Jed!- who produces fresh baguettes and Pain au Levain under the name “Rupert Rising Bread,” all with fewer ingredients than you can count on your hand- and no sugar. Problem solved, right? 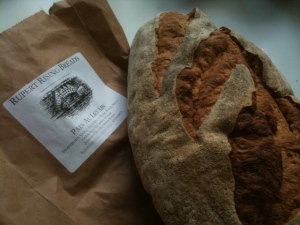 The thing is, everyone knows Jed’s bread is that good, and consequently it sells out from the general store practically before he shows up with it a few times per week. Now, I know I should figure out which days those are, put it in my calendar, and show up mere moments after delivery time in order to secure my continued supply of fresh, local, staff-of-life. Unfortunately, I have about 247 other things to do first, including mailing my mother’s hand-knit Mother’s Day socks a week late (hi Mom!) and writing my blog in which I can complain about how I have no time to go buy bread. So instead, I buy it when I see it, which isn’t nearly often enough.

So, I buy bread and freeze it, I make bread when I can get to it, and sometimes we just have to get along with Triscuits and that’s all there is to it.

Then again, rather than toast for breakfast we could have some nice steamed broccoli heads garnished with navel oranges instead- after all, we certainly have enough of them, and it would give Greta something new to write about. As long as everyone has their poodle-hats handy, I think it should be just fine.

You are currently reading A Year Of No Sugar: Post 47 at Eve O. Schaub.