The Mysterious Milkman and Aseptic Cartons

I can still recall the milk box we had when I was a kid. A cube-shaped metal container sat outside our front door and would fill with fresh, new glass bottles of milk once a week. I never saw the milkman, so it seemed rather like a magic trick: put empty bottles in and- poof– new milk appears! Whenever my parents got home from work, they’d bring them inside. 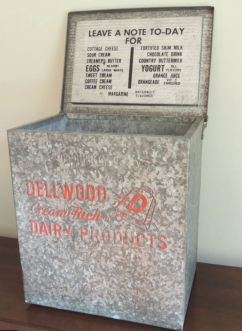 Our old milk box looked just like this one and now I feel very old.

It kind of boggles my mind now. At the time no one seemed particularly worried about the milk spoiling out there in the non-insulated box… or freezing… or that someone would tamper with the milk. The bottles each had a little round foil cap that peeled off the top when you wanted to open a new one, and it never sealed perfectly again once opened, but no one seemed too concerned about that either.

I know this makes me sound like perhaps I grew up sometime just before the invention of the icebox but this was the seventies, people.

Fast forward to my No Garbage project of today and here I am again thinking about milk. The pile of HELP WHAT DO I DO WITH THIS in my kitchen is ever-so gradually getting smaller, but the empty containers for milk are comparatively large and stacking up, effectively presenting themselves as the next urgent question to answer.

Before this project began I used to recycle milk cartons, thinking: paper. But soon after beginning the project I thought: Wait. Paper coated with plastic. If I have learned anything in the first two months of the Year of No Garbage, it’s that Frankenstein combinations of materials- such as paper and plastic squashed together by heat, say- are inherently evil, unrecyclable landfill fodder, probably invented by Satan.

I hear the cartons are meeting in secret at night behind the blender. I don’t like it.

But I realized that when it came to cartons I just really didn’t know. In search of answers online, I came upon the Carton Council, an industry organization that promotes carton recycling. Oh, hooray!! I thought. On their site you can input your zip code and it will instantly tell you whether recycling that includes cartons is available in your area. Now, when you live in Vermont NOTHING is ever available in your area, so I was sad, but not terribly surprised, to see that mine did not.

Fear not! the Carton Council website assured me, because you can mail your cartons in for recycling. To places like Virginia and Nebraska. It’s free except for postage, and, after all, this is not super-heavy material we’re talking about.

Okay, at least there’s something I can do, I thought. I didn’t love it, first because any additional level of complexity or cost is going to make it that much less likely for the average person to actually do it, and second because the environmental footprint of mailing boxes of cartons across the country to recycle them raises serious questions about the net impact of the whole endeavor. Aren’t we defeating the purpose a bit here?

The Carton Council’s list of places you can mail your cartons to currently.

Then I just happened to take a closer look at my garbage service “recyclable” list. Waitaminute! Contrary to what the all-knowing Carton Council website had indicated, milk cartons are on the list! This was excellent news.

But what about other cartons? The Carton Council’s mail-in locations also accept lots of other cartons, i.e. the boxes that hold shelf-stable things like juice boxes, soup and chicken broth. These items are labeled “Tetra Paks.” I don’t encounter them often, because we don’t drink juice and I usually make my own broth from leftover chicken bones and freeze it, but now that I’m having trouble buying whole chickens without plastic, my broth supply has dwindled to nothing.

Perhaps I could solve this problem, I thought, by buying Tetra Paks of broth for soups and sauces? Maybe those would be the only things I’d have to mail to Denver or Omaha.

But then I noticed something else intriguing on the list for curbside recycling: they also accepted something called aseptic cartons. What was that? The lady who answers the phone for my garbage service had no idea. Back to the Internet.

AHA! It turns out there are two kinds of cartons: refrigerated “gable top” (like the kind milk comes in) and shelf stable “aseptic ” (like the kind chicken broth comes in.) Both are combinations of polyethylene and paper, but aseptic includes a layer of aluminum as well. And aseptic is the generic name for Tetra Pak, which is a brand name. They’re the same thing.

The good news is that both of these kinds of cartons, unlike other paper/plastic amalgams— such as thermal receipts—can be separated back into their components for recycling.

The bad news is that this process still requires a fair amount of energy and effort, such as trucking giant bales of the cartons hundred of miles for elaborate processing. Although it keeps these materials out of the landfill, this still seems to defeat the purpose of being sustainable and earth friendly.

Hmm. So I can put my cartons, both gable top and aseptic/Tetra Pak, in the curbside recycling, and putting them in recycling is better than not putting them in recycling. But better still would be to find alternatives. For milk, I’m looking into a local dairy that has returnable glass bottles just like those of my youth. For chicken broth, my local butcher tells me if I call him ahead of time I can purchase chicken carcasses he’s butchered for parts, and bring it home in my own container no less. Promising leads, for sure.

I do miss the mysterious ways of the Dellwood milkman, though. He made it all seem so effortless.

You are currently browsing entries tagged with Tetra Pak at Eve O. Schaub.