Dear Recycling: Please Stop Trying to Kill Me. Thank you.

This is the thought I’ve been having a lot, because lately our house seems to be in particular chaos. There’s just STUFF EVERYWHERE.. It’s an awfully good thing I didn’t try to do Year of No Garbage at the same time as Year of No Clutter, because if I’ve learned anything in the last two weeks, it’s that an experiment in being Zero-waste is essentially a machine for clutter. 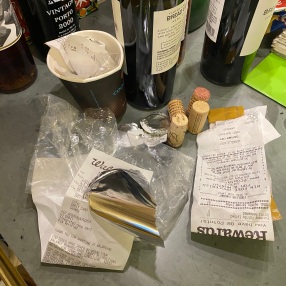 As I’ve written about before, clutter is the result of unknowns and unmade decisions, so it does make sense: all the I-don’t-knows and the what-about-this’s are stacking up. I’ll look it up! Has become my new favorite phrase, but always uttered while I’m in the middle of something else, so what I mean is: I’ll look it up later.

Right now I have a bowl of wine corks on my kitchen counter, right next to a small pile of wax pieces from a block of cheddar cheese. On the floor I have a clothespin holding a festoon of Mylar-lined items such as potato chip bags awaiting further investigation (note to self- call Terracycle). Next to that is a supermarket shopping bag filled with other plastic bags that I think can also be dropped off at the supermarket bag recycling bin: plastic bags from bread, from paper towels, from dried mango slices, from dry cleaning. I think this because I read it online- which is always foolproof, right?

A Festival of Mylar!

Next to that I have a large, clear, plastic container holding all manner of serious question marks. What about the penny-sized plastic spout that pops out of the top of the olive oil container? What about the plastic tag welded to the rubber band that came on the organic scallions? What about the broken hair elastic? What about the postage stamp-sized SILICA GEL PACK? And foil lids from the tops of bottles- are they really FOIL? I bend them and they don’t feel like foil, they feel like shiny paper… not to mention the fact that the great recyclers in the sky apparently frown on our attempts to recycle The Small Stuff- the plastic caps and bits of foil that, according to folklore, jam up the mysterious machines.

Have I mentioned that these are only the piles in my kitchen?

Sometimes I feel like a Recycling Detective trying to ferret out the truth from among a million different myths. Every person I talk to “knows” something different, and it certainly doesn’t help that the rules have been in constant flux ever since I encountered them for the first time as a college student years ago. This was in Ithaca New York, well-known for being even more crunchy than your average college town, and it was in my senior year that I encountered the city’s shiny new curbside recycling program. Who had ever heard of such a thing? Up until then my efforts to save the earth had consisted mostly of me wearing long flowery dresses; I was excited to be in my first “real” house and in the forefront of green technology.

Immediately I was frustrated by the fact that after rinsing and separating all my items and placing them carefully by the curb in a series of baskets and cardboard boxes, about half the items would not get taken by the trash collectors.

In retrospect I find it kind of amazing that the trash people had the time to sort through my proposed recycling as if it were my senior thesis. But what was I doing wrong? “Oh, that’s because you can’t put in any container that could stack with another container.” One of my more eco-savvy friends said. “Like yogurt containers or sour cream- it has to have a smaller top opening so things don’t get stuck inside one another.” 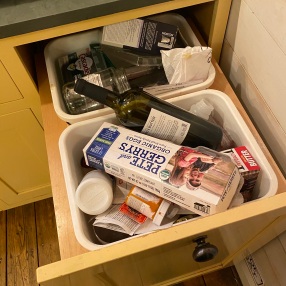 Now BOTH our bins are devoted to single stream recycling, and I’m amazed how fast they fill up

I don’t even know if she was right. It just felt like I was failing some kind of earth-loving test, to which no one had given me the textbook. I clearly recall thinking, Seriously? If they want people to recycle they can’t make it this hard to figure out.

And here I am having that very same thought thirty years later.

Going into this I knew I’d have trouble. I knew I’d want to be No Garbage perfectly right away, which is pretty much impossible. But then I remind myself that that’s the whole darned point: if it were easy there wouldn’t be much to write about. I imagine it’s likely that humans have always had some concept of garbage, but never have we had so incredibly much of it: for the first time in history we’ve made disposability a way of life. Undoing that will take some time. And thought. And uncertainty. And doing it wrong. So I’m working on being okay with that.

If you don’t hear from me for a few days though, it means I’ve been eaten by the piles.

You are currently browsing entries tagged with kitchen waste at Eve O. Schaub.