The Devil Is In The Dumpster: Is Plastic Immoral?

“I just want you to know that when this is over? We are not going to be doing this forever.”

That was my husband Steve, talking about living without throwing anything away, as we’ve done all this year, and he had about had it. It was late on a Saturday morning and we were standing in the driveway, arguing.

It had all started because of a beanbag chair. Two beanbag chairs, actually, that I had made a few years ago: one for each of our daughters. After picking a pretty fabric and sewing the pieces together with a zipper, I realized that stuffing it was… problematic. At least, if I didn’t want to use plastic. I desperately tried to find some eco-friendly stuffing.

Straw was too prickly. Rice or dried beans were too appetizing to mice. Old blankets or clothing were too… deflated.

Ultimately I gave up and bought online a bag of “recycled” beanbag filler. When it showed up, though, I was horrified: “recycled” beanbag material is basically shredded-up chunks of spongy Styrofoam tossed festively with staticky plastic micro beads. It was perhaps the worst thing I’d ever bought.

But I had bought it, so I figured it would go into the beanbags, be zipped shut, and I’d never have to deal with it again.

That was all true, for a while. Then in September we came home with two new cats adopted from the local shelter. As it turned out, the cats both LOVED the beanbags, and were also not ENTIRELY clear on the distinction between them and the litter box. 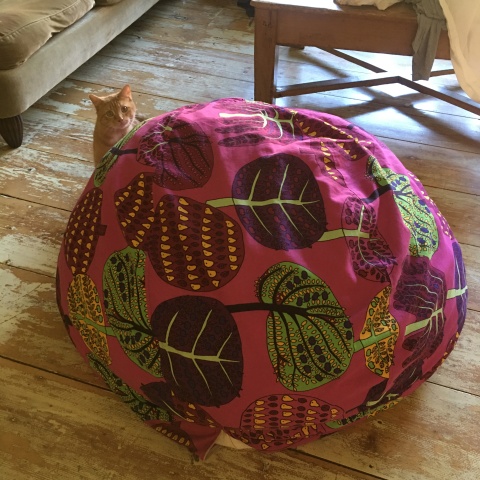 So away went the beanbags into a storage closet. There they awaited the day when I felt brave enough to deal with sacks of used Styrofoam perfumed with pee.

Last Saturday was that day.

Steve was trying to help me transfer the beanbag filler from the shell to a garbage can and all the while he was getting more and more agitated.

“You can never write about this. You know that right? I mean, how do you justify throwing something like this away?”

“Well… either this falls under ‘Health and Safety garbage’, on account of the cat pee,” I said, “Or… we keep it in the trash can here until January first when the year is officially over.”

As we tried to dump the contents of the fabric bag, plastic beads and fluff were getting everywhere, floating in the air, sticking to our clothing, falling like snow onto our driveway.

“They will crucify you.” Steve said simply.

“Well… if they do, they do,” I said, uncomfortably. “I mean, I have to talk about this, right? This is what the whole thing is about. Things like this should not exist.”

“Things like this should be illegal.” Steve said, walking away in disgust.

All that fluff and springiness I had wanted for the beanbags was now working utterly against us. Styrofoam and pellets had completely filled the 95 gallon trash bin and were resistant to being packed down in any way- bouncing right back up after every attempt. Flecks of plastic were stuck in my hair, bits were drifting by on the ground. It was a plastic nightmare.

“Where are you going?”

Steve managed to scrape up all the bits that had fallen onto the ground, along with some gravel and dirt that helped weigh it down in the bin somewhat. From the garage he grabbed an old foam core sign to help keep it contained and I realized the sign was one we made for the Climate Strike in September of last year.

We bickered some more about what would happen if the wind blew our bin over, (clearly, we would have to move) or whether I should take pictures of the hideous blob. It was beyond lunchtime and we were both getting hungry. Arguing on an empty stomach seems to be our specialty.

That’s when he said enough was enough.

“Year of No Sugar? That changed us, changed our lives… ” he said. “And all this garbage everywhere? All over the house? With no where to go? We can’t keep doing this. It’s killing our family.”

I just looked at him. I knew exactly what he was talking about: what the hell were people thinking making all this stuff for which there is no earthly solution? It’s beyond maddening- when you are forced to really look at it it’s… obscene. Yet, how could we possibly go back to life as before, knowing what we know now? Knowing that so many of the “recyclables” we put into single stream end up littering the landscapes of countries halfway around the world? Or floating in the ocean strangling marine life? Knowing how destructive this path is for the entire planet?

How can you ever put the genie back in the bottle?

It scared me, this fight, because it had veered into territory that touched on a fear of mine: the fear that I am somehow doing something quite horrible to my family in the selfish interest of my writing. Each one of the three times we’ve embarked on a “family project” I’ve considered the questions:

-Is this okay to ask of my family?

-Will it cause pain to or harm my children?

-Will this do harm to my marriage?

I know I’m lucky. Very lucky. Not many families would have been willing to go along with such schemes. What was really bothering me was the possibility that, in the homestretch, in the last month of what has turned out to be a ten-year enterprise, Steve might now be coming to the conclusion that I had done some harm to our family.

But I don’t think that now. I know Steve, and when he is upset, he starts trying to solve the problem. He doesn’t believe in a “no win scenario.”

What was making him crazy was the realization that I’d been coming to lately too: that there is no real solution here. There is no good place in the universe for the vat of horrible plastic crap that was before us. Being an eco-friendly consumer in today’s world of plastic in tens of thousands of variations is almost impossible because the game has been rigged: plastic is just too darn profitable for too many people. Want to buy most foods? Most products? Drive a car? Want to live in today’s world? It involves plastic.

So we make deals with ourselves. We do the “best we can.” We are encouraged to think we can make a difference by doing good things like recycling, and that such efforts are enough. We can be persuaded to believe it because the big lumbering trucks take away all evidence to the contrary on a weekly basis: absolving us. When you step outside that system however, as a Year of No Garbage has allowed us to do, you see the lie plain as day: the current system isn’t set up to actually work.

After we had secured the treacherous bin and headed inside, the argument blew over. I understood that the little pieces of sticky-plastic-everywhere had triggered Steve into wanting to pitch the baby of our whole year-long project out with the Styrofoam bathwater. If only for a few moments.

But that disgusting, landfill-ready mess is all the more reason for us to persevere. I think Steve hit the nail on the head when he was trying to scrape the driveway clean, when he said this stuff should be illegal. And then he said something else that I felt in my gut to be true.

You are currently browsing entries tagged with driveway arguments at Eve O. Schaub.