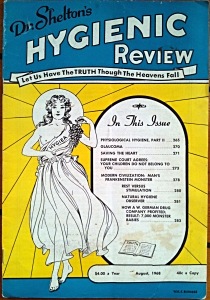 Food extremism is nothing new to my husband Steve. He grew up in a home that was a bit of a nutritional house divided: his mom serving the foods most people were eating in the mid-west in the seventies and eighties- pot roast, mac and cheese, pudding, etc.- while his dad frequently ate a different meal altogether, experimenting with various different nutritional theories he was reading about in specialty magazines like “Dr. Shelton’s Hygienic Review.” (motto: “Let Us Have Truth Though The Heavens Fall.”)

Steve’s father, who passed away a few years ago, was a vegetarian before people even knew what that was, back when health food stores were still fringe operations frequented and operated by folks who still thought communes might be a really good idea. But Bill Schaub was no long-haired hippy; he was a trim, clean-shaven lawyer who would one day rise to become Regional Director of the National Labor Relations Board and be conferred the rank of Meritorious Executive in the Senior Executive Service by President Bill Clinton. I try to picture him walking into the Toledo-area granola shop in his suit, his aftershave clashing with the smell of patchouli and wheat grass.

My husband recalls the time his father took him to see the watershed movie Star Wars. Steve was not very excited to go, because outings with his father were often nutrition oriented and pretty dry stuff for an eight year old: “I thought we were going to a lecture on carrot juice or something.”

In another favorite Bill Schaub story, he grew a mustache, (of course! it was the seventies!) This development coincided with the peak of his interest in the nutritional value of mangos and his decision to import boxes of the fruit himself, which of course resulted in his brown mustache turning mango-colored from the sheer volume of orange fruit that passed his lips.

There are lots of Bill Schaub anecdotes like this, illustrating his passion and single-mindedness when it came to the subject of nutrition and food. Steve is his father’s son, and inherited from him not only an attentive attitude toward food and nutrition, but also the unusual ability to endure strange and restrictive diets for various goals.

For example, in addition to our family’s ongoing No Sugar Project, Steve has for the last seven weeks also been shunning all dairy, and all bread products. Also no potatoes. Basically just meat, eggs, and any vegetable and fruit which you could eat raw. You can imagine how much fun we are in restaurants.

Eve: “I have a strange question. Does the lasagna have sugar in it? And also, what about the soup?”

Steve: “Can you tell me, is there gluten in the sausage? What about in the cabbage? I’m also not eating dairy…”

Eve: “No, the kids don’t want lemonade, could they just have water…?”

The thing is it has worked. I mean, Steve looked completely fine before, and thin compared to your average American profile. But in a few weeks on this Paleo / Raw diet he’s lost over twenty five pounds. I know! We’ve been buying him new pants since nothing fits anymore- he looks great. More importantly, he’s clearly happier.

Interestingly, Steve’s father had an addiction to sweet things- cookies, ice cream- which he battled with all his life. Steve’s own addiction is much more specific: diet Dr. Pepper. Not to put to fine a point on it, Diet Dr. Pepper is Steve-crack.

The other day Steve sheepishly brought home a case of the stuff, justifying, “well, I thought it could just drink it in the evening as a snack…”

After I gently pointed out the Steve-crack phenomenon, even he agreed it probably should stop. I know it’s not easy- we all like to have our crutches to lean on when we feel depressed and deprived. For me, “mother’s little helper” is more vague… once upon a time pre-project I would’ve enjoyed a bit of chocolate or cookie after every lunch and dinner- a sweet of some kind albeit a small one. I still miss that ritual, that sweet little ending to a meal. Lately I supplement that desire with an alternate treat- a banana, an unsweetened cappuccino, a GoRaw granola bar with raisins in it. It gives rise to the question: do we have to chose between health (long-term happiness) and desire-gratification (short-term happiness)?

The other day Steve was talking about his dad. “If my dad was alive today he’d be fascinated by this project,” he said. “He’d be sending us articles and talking to us about it all the time…” I know. It’s sad he isn’t here to share it with us.