The Chicken Who Lived

I know the world is ending, but first I’d like to talk about something that happened at our house this week: one of our baby chickens was attacked by a raccoon and lost a good part of her face.

We’ve been raising baby chicks for the first time this year. We bought nine of them when they were a day and a half old, at which point they resemble little balls of fluff with legs; for the first several weeks, before it got warm enough for them to be outside, they lived in a metal tub in our dining room. There they ate and drank and were somewhat smelly and argued over who got to play with the loose feather someone found. So, you know, pretty much what we do in our dining room.

Although we’ve never raised from chicks before, we’ve kept chickens for the last ten years, so we know the deal: chickens live short, unpredictable lives, and it’s best not to get overly attached. Like, you stop letting the kids name them. We’ve had chickens carried off by fox, raccoon, hawk, and even a bobcat once. We’ve had three brand new pullets decimated in the night by a predator who left only a few gristly feathers and a foot behind. We’ve had them die of strange diseases that make their heads list mysteriously to one side, or stand in one spot all day without moving or eating.

So when we discovered our little half-grown chick bloody and missing key body parts (a large swath of feathers and her beak), we knew the odds of her surviving were Definitely. Not. Good. I felt woefully under skilled as we tried to clean her up and ascertain the damage. Looking at the place where her beak was supposed to be, I couldn’t make any sense of it. Splintered shards were sticking out everywhere- was that beak? Was there any beak left? What about her tongue? Or was that a piece of hay? I felt a strange mixture of anxiousness and defeat at the same time. How can I help if I don’t even know what I’m looking at?

I feel this way a lot lately, and not just about chickens. This morning I asked my husband, as he scrolled the news on his phone, “So, what’s happening in the world? Or, should not I even ask?”

I mean, here we are in the throes of the first major pandemic in a hundred years.

And there’s rioting and looting in the streets of our major cities.

Have I left anything out?

When the state of the world is this chaotic and unpredictable, it’s hard to know how to feel. Is the pandemic ending now? Or is the worst yet to come? Is it too late for the planet, the polar bears and the rainforests? Or can something still be done? Why are innocent people being killed in the streets by the very folks sworn to protect us all?

How can I help if I don’t even know what I’m looking at? 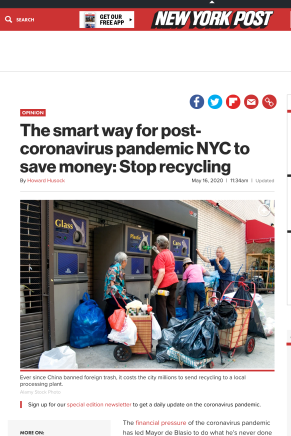 Just in case I wasn’t feeling bad enough, a friend forwarded me an Op-Ed from the New York Post, making the argument that New York City should stop recycling. Yes. With all that’s wrong in the world why not just throw some gasoline on the fire?

The worst part is that the author of the article, a senior fellow from a conservative think-tank, makes a decent argument. Remember how in 2017 China stopped accepting recyclables from the United States? Have you ever wondered what happens to all that recycling now? Well New York City has been paying a small fortune for private companies to take it. According to the editorial’s figures, the city spends around $390 million to get paper, metal, glass and plastic into the hands of recyclers and consequently could save about 87% of that amount, or $340 million, if all of it just went straight to landfill.

That sounds like a lot of money. But is it? The annual budget of the city of New York is about $86 billion. Which would mean that landfilling recyclables would save New York City less than one-half of one percent of its budget. A fraction of a fraction, but still… $340 million is $340 million. Fortunately, when Mayor Bill de Blasio announced his proposed upcoming budget on April 16th, which included many slashed programs, eliminating recycling was not one of them.

But the fact remains, one of the biggest obstacles to recycling is cost. If people have to choose between, say, food and shelter and recycling? Obviously it’s no contest. Likewise New York City or any other municipality.

Tom Szaky, the founder of the innovative recycling business Terracycle, has an interesting take on this subject of recycling and cost. Recently I watched a keynote address he gave at Planet Forward, an annual student journalism conference, which is available for viewing on YouTube. In it he introduces a novel concept: there is no such thing as not recyclable.

Rather, Szaky says, it’s a matter of simple economics: if you can find someone to pay for it, then you can recycle it. No exceptions. Terracycle has proven this with a team of in-house scientists who have found ways to recycle everything from cigarette butts to dirty diapers.

But who wants to pay for this recycling when the end product is more expensive than buying new? In his presentation he offers an interesting solution: change the story.

“People want purpose,” he tells the roomful of communications majors. He gives an example: a shampoo bottle Terracycle developed with Proctor and Gamble that uses 25% recycled “beach plastic” in the packaging. He relates an anecdote in which one P&G associate is jokingly mad at Terracycle for having greater success with a 25% recycled plastic bottle than they had had previously with a 100% recycled bottle.

Why are people more interested in a 25% recycled bottle than a 100% recycled bottle? Szaky’s point here, I think, is that the story of beach plastic recycling, which conjures up powerful images of turtles with plastic straws lodged in their nostrils, is compelling to the consumer, in a way that the generalized idea of “recycling” cannot be.

“That’s one of the biggest challenges in sustainability communication I think.” Szaky elaborates. “It’s 99% ‘the world is ending’ and at the end it’s like ‘well, turn your light-bulb off when you leave your home.’ And it’s like well, those aren’t balanced concepts. And then I might as well (say) fuck it and just party because the world is gonna end and I can’t do anything about it right? We need to empower this positivity, the inspiration that there is a way to solve it. ‘Cause there is.”

How do you get people to change their behavior? To clean and sort their recyclables? To spend more money for recycled packaging? To demand their government officials continue to invest in curbside recycling? You need a powerful story they can relate to. Cleaning up ocean plastic so that sea turtles don’t have to have straws in their nostrils is one such story.

Speaking of nostrils, or lack thereof, we ended up taking our chicken to the vet. And believe me, finding a vet who sees chickens is not an easy thing to do. (See the chicken-keepers mantra, above.) We were about 85% sure he would tell us to put her down.

But he didn’t. He said “I’ve seen chickens worse off than this, that recovered.” That was all we needed to hear. Yes, it’s financially bonkers- how many farmers do you know who would pay vet bills for $4 chick, who may very well die in the end anyway? But we’re not farmers. Keeping chickens for us is about enjoying them and their eggs, not about making financial sense. Don’t get me wrong, we’re not going for the six-million dollar chicken here, but if we can manage to save her— the vet has described gluing on a new prosthetic beak— we’d really, really like to.

The Chicken Who Survived Being a Metaphor

A lot of it comes down to just paying her some extra attention, keeping her separate (she’s back in the tub in the dining room), and feeding her a couple of times a day with a dropper. She’s been through a lot, as have we all lately, and she looks a little bit like Sylvester Stallone at the end of the film Rocky. For one thing, in a world where so much is going wrong, it’s one tiny good we can do.

For another, well, we’re invested in her now. You see, she’s got a story.

You are currently browsing entries tagged with beach plastic at Eve O. Schaub.