How Many Crowns Does One Girl Need?

Have you ever had a three-week old bag of pumpkin guts in your fridge, and wondered what the statute of limitations was on keeping it? Of course you have.

When this happened to me last week the situation was further complicated by the fact that I couldn’t just do what any sane 21st century American would do and throw it away. Instead, there I was, standing in the rain, covered in pumpkin goo to my elbows, washing out a white plastic garbage bag with the garden hose. 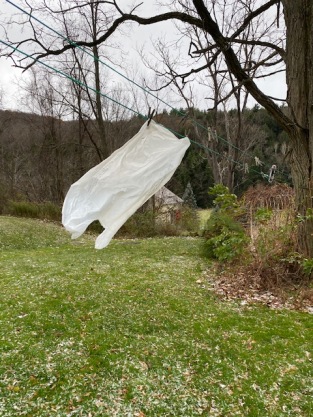 The pumpkin guts, incidentally, had been sent home by a super-well-intentioned parent after my daughter Ilsa had been pumpkin carving at a friend’s and mentioned that she wanted to roast the seeds. But when the goo in question is three weeks old, I feel that ship has definitely sailed.

I SO didn’t want to clean this plastic bag of slimy goo out. I toyed with several impractical evasions: could I leave it in the fridge forever and hope no one noticed? Maybe it would eventually develop sentience and wander away on its own? Is there a 1-800 Goo-Hotline?

I had fantasies about classifying the goo-bag under our sole “No Garbage” exemption: “Health and Safety,” and sending it to the landfill along with the Band-Aids and feminine products. (I mean, does mental Health and Safety count?)

Then I imagined: gee! What if the bag just suddenly “blew away”? Then it would be somebody else’s problem. Darn it!

But no. I looked this perfectly ordinary kitchen garbage bag in the eye and understood that neither snow nor rain nor gloom of night could prevent me from having to deal with its existence. I shock myself when I really think about it… that this plastic will be around much longer than I, or my kids, or even my grandkids will be- and for what? So we could tote some pumpkin from one town to another on a whim, soon to be abandoned.

The guts are now happily decomposing in my compost pile; the plastic bag is enjoying a place of privilege on my clothes drying line. And it really wasn’t so bad, cold slime and all.

Meanwhile my daughter Greta, who is living in Brooklyn and studying to be an actress while avoiding the pandemic AND living without garbage, has her own albatrosses. She was in line to get Corona tested— again. (Her school now requires testing every two weeks.) This time the line was over an hour long and it was bitterly cold. The woman in front of Greta asked if she would save her place while she went to get a hot drink. In return she offered to bring Greta a coffee, which she gratefully accepted.

And then Greta realized: how would she drink her coffee while in line, surrounded by people waiting to get Corona virus tested, while wearing a mask? Normal people would solve this problem by forfeiting the coffee and quietly throwing it away at the next opportunity.

But what could Greta do?

“So I’m just carrying around this COLD COFFEE,” she explained later. Feeling ridiculous, she was toting a dangerously full beverage that was lukewarm and no longer appealing.

In desperation she considered giving it to the homeless guy who she passes every day- maybe he would like it? And then she thought: “HE’s not gonna recycle it- plus he’s the one who always swears at me, so that’s probably a bad idea anyway.”

Greta carried that cold cup of coffee with her all day. It got Covid tested with her. It took the subway back to her neighborhood. It went shopping with her. It patiently waited on the supermarket floor while she gathered up her groceries and then got picked up again. It walked home with her.

Finally she could dump it out and rinse the non-recyclable cup. And now?

I feel her frustration, because this is the reality of plastic that garbage helps us deny: it’s not going anywhere. Throwing plastic away is a trick, a sleight of hand. All those disposables are still right here we just can’t see them.

Right now I’m reading the book Garbology by Edward Humes, which begins with the premise that Americans are addicted to garbage. I think this is very true, however I think it’s important to point out that it’s not just a matter of personal responsibility, it’s not just individuals who are addicted, but society as a whole, which has evolved to accommodate this addiction so completely that swimming against the tide of disposability is incompatible with normal day-to-day functioning.

Americans are addicted to garbage, but it’s worse than that: it’s like we’re all alcoholics living inside a bar. Even if we want to get away from our addiction, the surrounding environment actively encourages failure.

It’s enough to cause me to get a little desperate sometimes. Whether I am rinsing out a bag whose sole purpose in life is to be thrown away, or putting another wet paper towel in my purse because I forgot- AGAIN- not to take one in the public restroom, these are the moments that demonstrate to me how very far we’ve got to go as a society to start un-brainwashing ourselves.

I mean, how many plastic fork crowns does one girl really need?

§ 2 Responses to How Many Crowns Does One Girl Need?

You are currently reading How Many Crowns Does One Girl Need? at Eve O. Schaub.