My Mind Is Easily Blown: The Scoop on Cat Litter, Toothpaste and Reusable Bags

As a confirmed cat person, I’ve never gone terribly long without owning a cat. Or two. Three at most- I swear.

We said goodbye to our last cat one year ago, so recently we felt like we were ready for a new furry addition again. We headed to the local humane society to find a new kitty to adopt.

We came home with two.

Gratuitous picture of our new kitties.

Immediately I was faced with a dilemma I had been studiously avoiding thinking about up until that very moment: what will we use in the litter box?

In the past I was, admittedly, the worst kind of cat-owner in the environmental department; when it came to cat poop and pee, I just did NOT want to deal. In the interest of minimum effort and maximum cleanliness, I bought the most high-tech (read: expensive) litter I could find: silica gel based litter. Every week, when it was time to change the litter, I wrapped it all up neatly in the plastic disposable litter pan liner before sending it on its way to live in the landfill for the next several thousand years.

I shudder to think of it now.

Several years ago my brother had suggested trying a newspaper-based litter that sounded very environmentally friendly, but it also sounded messy, smelly, dusty, and difficult to find. At that time in my life, in addition to two small cats I also had two small children, so generally speaking if it wasn’t at my supermarket, I wasn’t buying it. Period.

Fortunately times have changed and environmentally friendly litter is now less messy, more effective and more available. While at the humane society I noticed that their litter boxes contained an unfamiliar pellet mixture.

Wood pellets marketed for kitty litter on the left, and for pellet stoves on the right- it’s the same stuff.

“That? Oh, those are wood pellets,” the shelter worker said. “They work great and they’re biodegradable. You can buy them as cat litter but it’s cheaper to just use pellet stove pellets.”

Cat litter I can put in my compost?

“You can also use chicken feed.”

In other good news, I recently noticed that Tom’s Toothpaste has made a small but significant change to their packaging: no longer does the tube have a Terracycle logo on it. Instead, new tubes have a blue recycling triangle with caption below reading: “Once empty, replace cap and recycle with #2 plastics.”

If I was a cartoon I would’ve rubbed both eyes with my knuckles before taking a closer, saucer-eyed look. Easily recyclable toothpaste tubes? Was I dreaming? 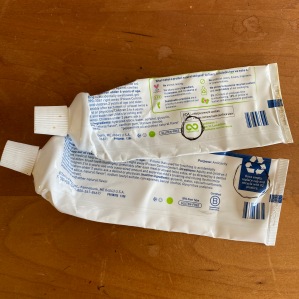 Tom’s tubes before and after.

But no, once I looked it up on Tom’s website I found a whole page devoted to explaining that they’ve changed their packaging and that they haven’t totally broken up with Terracycle, but you know, they just want to see other people.

To recycling nerds like me, this is pretty big news, because dental care is one of the very hardest categories to recycle. Of the two things I’ve ordered from Terracycle— which due to its cost I consider to be the recycling of last resort— one is their “Oral Care Waste” envelope just for toothbrushes, floss and toothpaste tubes. Because: what else can you do with these things? This is also why Zero Waste proponents give out recipes for making your own toothpaste out of things like baking soda and bentonite clay.

But I like Tom’s Toothpaste, and don’t know where to buy bentonite clay, so I’m delighted to learn I don’t have to do any more ninja-level recycling when it comes to toothpaste tubes.

The thing that truly stopped me in my tracks, however, is the fact that Tom’s paid to develop this technology, but is sharing it with other toothpaste manufacturers. According to their website, this is because recycling facilities can’t tell the difference between a recyclable toothpaste tube and a non-recyclable one, so the sooner everyone is using this technology the better.

The last thing I wanted to mention is the persistent myth that reusable bags are a potential source of contagion for the coronavirus. Although this idea has been thoroughly discredited, most recently in a report issued in June, signed by over 125 health experts including virologists and epidemiologists, it is still hanging on stubbornly in some places. Although my supermarket has gone back to allowing reusable bags, I’ve heard from many folks whose stores are still banning them.

The truth is that reusable bags are not dangerous, the plastics industry would just really, really like you to think that they are. In fact, they’ve been trying to make us think this long before the appearance of COVID 19. A 2010 study funded by the American Chemistry Council, (which in turn is funded by plastics producers) looked for Salmonella, Listeria and E.Coli on reusable bags and ooo— you know what?

They didn’t find any.

But they could have! Seriously, after the study was released, that was the headline.

Here’s what Michael Hansen, senior staff scientist at Consumers Union, had to say about it back then: “A person eating an average bag of salad greens gets more exposure to these bacteria than if they had licked the insides of the dirtiest bag from this study.”

Not that I’m planning on licking any supermarket bags any time soon, but what I think is important to notice is the recurring pattern of using fear to get folks to consume more plastic:

Yes, keeping everyone safe and healthy is, and should be, a paramount concern. But we don’t need to fabricate problems where they do not exist just to keep the plastic people in business. Doing so puts the health and safety of the planet at risk, which—spoiler alert! — comes back to jeopardize us as individuals in the end.

But people are starting to catch on. You can’t fool the public forever. The fact that they thought they could? Well…

§ 9 Responses to My Mind Is Easily Blown: The Scoop on Cat Litter, Toothpaste and Reusable Bags

You are currently reading My Mind Is Easily Blown: The Scoop on Cat Litter, Toothpaste and Reusable Bags at Eve O. Schaub.