When it comes to Halloween candy, how much is too much?

Halloween is over, but the memory lingers on. You can find it in the form of new residents of kitchen counters across the land: bags, pillowcases and plastic pumpkins full of added sugar. Have you ever looked at one of these bags and wondered: So. How much sugar is in there?

While looking at my daughter Ilsa’s haul soon after it appeared, it suddenly occurred to me to wonder this very thing. So, in the name of questionable, nosy-parent, food-nerd science, I set about to find out. Ilsa’s candy bag weighed in at just over three pounds. I dumped the contents onto a blanket and sorted it just like the kids do after coming home with it, grouping by type… Kit Kats over here, Sour Patch Kids over there, weird off-brand candy no one will trade you for over there. 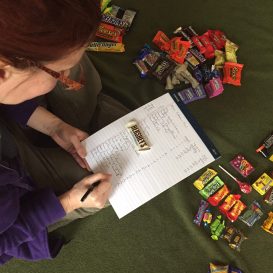 The real question: does Ilsa realize how nerdy her mom is?

I compiled a list of all the different candies. And then it was time to figure out the sugar content of each and every piece. (After checking many sites, I found this one to be the most useful: https://www.nutritionix.com.) Once I added it all up, Ilsa’s fairly average candy haul turned out to contain approximately: 795 grams of sugar.

To put this in context, on their website, the World Health Organization currently recommends added sugar not exceed 10 percent of daily calories, or 25 grams per day. So, if we divide the amount of sugar in Ilsa’s Halloween bag by the WHO’s recommendation per day— 795/25— Ilsa’s candy is enough to provide her with all her added sugar for 31 days.

Interestingly, though, there’s more. The WHO website then goes on to further recommend that, actually, it would be even better if people restricted added sugar to 5 percent of daily calories, or half the amount they recommended just a minute ago, in the previous sentence. http://www.who.int/elena/titles/guidance_summaries/sugars_intake/en/

By this new and improved standard, of course, Ilsa’s candy lasts twice as long, or about two months. This assumes, of course, that she hasn’t eaten added sugar anywhere else in her diet.

But even if one never eats any dessert at all, we know that most people are getting added sugar from other sources in their diet. From juice. From ketchup. From store-bought chicken broth or salad dressing or crackers or mayonnaise or bread or flavored yogurts… you get the idea. What this means is that having more than one piece of candy per day is extremely likely to make you exceed your recommended daily limit of sugar. So if you can manage to limit your kids candy consumption to one piece per day (dare we hope for every other day?) that’s best. That’s the first take-away.

But there’s another, more important take-away; it starts with the fact that one pound of sugar is equal to approximately 454 grams. If Ilsa had brought home a three pound bag full of sugar- just sugar, without nuts or rice crisps or additives or any other ingredients- it would amount to… 1362 grams. So, working backwards, knowing that her bag actually contains 795 grams of sugar tells us that her bag is just over fifty percent pure sugar.

Caution: feet are not edible

I promise not to ask you what time the two trains will meet. But here’s the kicker: weighing in at three pounds, Ilsa’s bag contains, roughly, a pound and a half of pure sugar, right? As we’ve already concluded, this means that the WHO would recommend she eat her candy over the course of a month or two, but really more like three or four if you include the fact that she will very likely be getting added sugar from some other sources in her diet.

Let me say that once more, because it’s important:

The amount of sugar the WHO recommends we eat in one or two months, the average American eats in three and a half days.

Try to imagine eating 95 pieces of candy, an entire trick-or-treater’s bag, in three days. That’s about 27 pieces of Halloween candy a day. This level of sugar consumption is not theoretical- this is what the average American already does, Halloween season or not. So. Does the obesity epidemic make a little more sense now? (Not to mention the diabetes, metabolic syndrome, heart disease, liver disease, and hypertension epidemics?)

In this light, the statistics bear revisiting:

We’d like to think that Halloween is a special time of year when we indulge in sugar a little more than we should. The reality— and the real lesson of my nosy-parent science experiment— is that those big bags of added sugar do not represent the exception. They represent the rule. It’s Halloween in America- Every. Single. Day. And the consequences of our unwillingness to recognize this fact are enormous.

Thank U Smarties! The one candy that has no fructose– the bad guy of added sugar

I know no one wants to be the dorky parent who hands out erasers or nickels at Halloween, or the no-fun parent won’t let her kid have more than one piece of their hard-earned candy every day or two, but you know what? I, for one, am embracing my dorkiness. Also, I’m hiding Ilsa’s candy bag in the freezer.

Tagged: a year of no sugar family, food nerd, halloween candy, halloween deconstructed, halloween haul, halloween in vermont, halloween sugar, how much is too much sugar, nosy mom

You are currently reading Halloween: Deconstructed at Eve O. Schaub.