Garfield is Getting Nervous 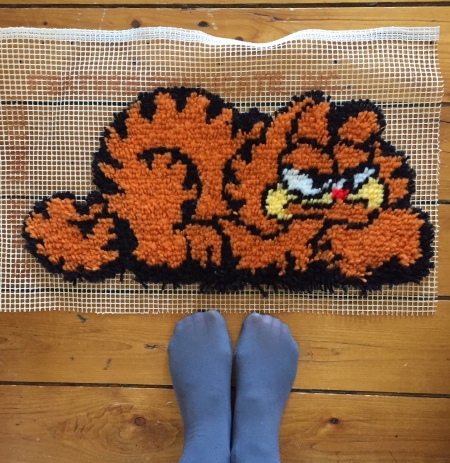 So I’m currently taking a poll to determine the fate of Garfield the latch-hook rug. Yes, when it comes to getting rid of things, I’m that desperate- apparently certain items require a crowd-sourced intervention. And let me tell you, Garfield is terrified. Or maybe it’s me. Hard to tell.

Ever since I cleaned out my own personal Hell Room, he’s has been scrunched up on an armchair in the library-hallway-room tormenting me. Yes, through a display of sheer Herculean willpower on my part I did manage to part with many terrible, horrible things during my Year of No Clutter, but Garfield was clearly not one of them. I mean, he’s juuuuuuust weird enough to be intriguing. Just random enough to be endearing.

Plus he has a face. Which is always hard.

Do I want him? Need him? Have any idea whatever to do with him? No. How do I feel every single time I lay eyes on him, messing up my armchair, cluttering up my tiny little reading area? Annoyed. Irritated.

For many people, the answers to those questions would be enough. They’d toss him in the trash or charity donation box and that would be that- not another thought would be given to the matter.

I am clearly not one of those people. Instead, I second guess. I think about how Garfield was, for a time, an extremely cool cartoon character. Really! If you were there, you’ll back me up on this, I know. In the late seventies when Jim Davis came out with the comic strip, Garfield represented a totally new idea: the Uber-Anti-Cat, the exact polar opposite of say, Hello Kitty. He was decidedly not cute. Not affectionate. Not demure and purring and sweet. Instead he was grouchy, lazy, and possessed of a propensity to eat all the lasagna within the nearby vicinity. He was a cat with chutzpah.

As a kid I read the strip religiously in the Sunday funnies, on the floor, by the heat grate, competing with the family dog to see who could sit most directly in the path of the intermittently blowing hot air. I had a t-shirt that my mom bought me when she went back to school with a picture of Garfield on it. He was unenthusiastically holding a college pennant in his hand with the thought bubble “So this is Pace University. Big, fat, hairy deal.”

In the early eighties, this qualified as highly sophisticated humor.

(That is until Bloom County came in and took over in a walk. Don’t even get me started. I still miss Opus.)

And then I think about all the many, many, MANY latch-hook rugs I made as a kid. I was an artsy-craftsy kid born to decidedly not-artsy-crafty parents, so I was constantly trying to learn new crafts, and yet there was no internet to teach me. !!! Instead of learning the complicated things I longed to know such as knitting or sewing or embroidery, I made ropes and ropes of macrame, dozens of wonky little yarn pom-poms, piles and piles of latch hook rugs… projects that were as easy as they were purposeless. My mom kept buying the latch hook rug kits because they were cheap, but once they were done I always wanted them made up into little zippered, decorative pillows for my room, which was expensive. In the interest of not having to take out a second mortgage on our house, she decided to stop having the rugs made into pillows right around the time I finished Garfield, which is why he remains unfinished to this day.

So. Now that I’ve told you all that, if the poll tells me to, can I really bear to pitch Garfield? Or maybe it’s the other way round: now that I’ve told you the story, maybe I’ll be released from my obligation to him, like a character in a fairy tale who has broken the magic spell. Hard to say. I keep imagining myself at the charity shop, trying to donate Garfield the Latch-Hook Rug and being violently overcome with remorse, much to the surprise and consternation of the little old ladies who take donations there. Hopefully (are you listening, Clutter-Gods?) HOPEFULLY that is not where this is all going. That would not be fun for anyone, you know.

By the way, have I mentioned that I also have latch-hook-rug Odie? 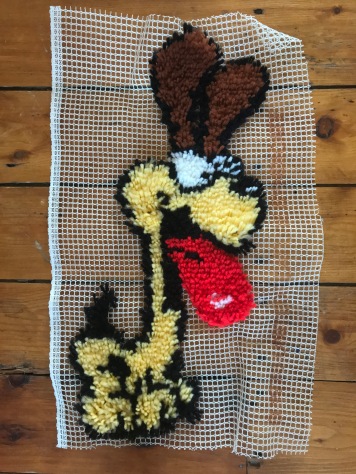 § 5 Responses to Garfield is Getting Nervous

You are currently reading Garfield is Getting Nervous at Eve O. Schaub.