The Moral of Blackberry Tarts

Everyone who has a kid knows that there are moments when they surprise you utterly. Not like the time you caught them drawing on the wall with a sharpie. Like, in a good way, I mean. 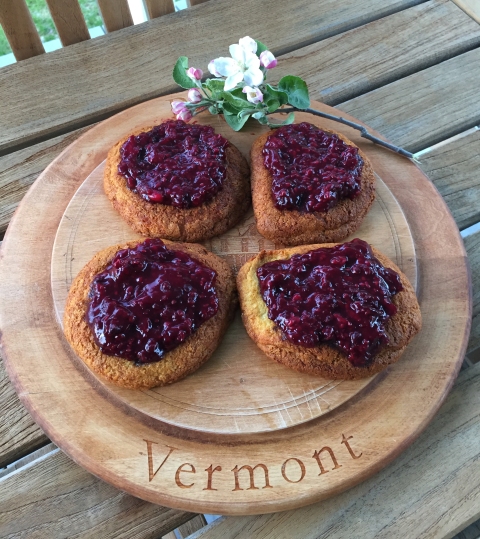 Last night I had one of those moments. I came home from doing an errand to find my 12 year-old, Ilsa, shouting: “Don’t come in! I have a surprise for you!!!”

I know moms everywhere will forgive me for my next thought:

When Ilsa finally allowed us to see the table, though, I stopped in my tracks. The table was set for dinner- which was lovely in and of itself- but beyond this, sitting just to the side, was a beautiful… something. A platter that called to mind perhaps the tarts stolen by the Knave of Hearts. She had even styled it with a sprig of apple blossom, as if the folks from Martha Stewart Living would be stopping by to photograph it for the cover at any minute. They could have, too: it was as pretty and summery as anything I have ever seen.

Now, those of you who know me will recall that Ilsa has long been an improvisational baker. For whatever reason, and despite the fact that her mother is a confirmed recipe-slave, my youngest daughter simply has no patience for step-by-step instructions in the kitchen. Now that she’s old enough to use the stove and oven by herself, occasionally we are treated to her impromptu experiments, which I’m amazed to report, are always edible, and often surprisingly good.

On this occasion Ilsa had outdone herself. The little cake/tarts were moist and perfectly browned; the berry compote-like-mixture on top delicate and jammy. She was skeptical: too much baking soda, she said. I was skeptical right back: “I don’t know,” I said, my mouth full of tart, “These are really good.”

Hmmmm. I thought, as I took another bite, “Ilsa?” I asked. “Did you use sugar in these?”

“Nah” she shrugged. “We didn’t have any, so I just used the berries.”

So. I just want you to remember this story when people tell you kids need sugar. Must have sugar. That denying them sugar is, well, just plain mean. I’ve said it before and I’ll say it till I’m blue in the face, kids need lots of things: Love. Support. Nourishing food. Fun. Failure. They need a lot of things, irreplaceable things, things for which there is no substitute, but sugar isn’t one of them.

I’m not going to lie to you and say my kids don’t ask for dessert, don’t want cookies when they see them in bakery cases, don’t accept when people offer them candies to suck on: they do. Who among us is not conditioned to hold out their hand when offered a treat? But when they get those treats, how often do they say “Ew. This is so sweet!” and throw it away? You’d be amazed.

Just the other day in the parking lot of the school a friend gave us a chocolate eclair from a famed Italian bakery (yes- lovely, deeply well-meaning people still hand me sugar even though I wrote a whole book about avoiding it) and Ilsa clamored from the back seat to try it- terrified the way youngest children always are that she was going to miss out on something amazing. She took one bite and handed it back to me. She did not want any more.

“It tastes like… you’re just eating sugar!” she said disdainfully. “Why would they do that?”

Tagged: blackberry tarts no sugar, kids and sugar, no sugar cooking, year of no sugar kids

You are currently reading The Moral of Blackberry Tarts at Eve O. Schaub.