August is here and as usual my summer begins to feel a bit panicky right about now. Summer is so very fleeting here in Vermont, that I never feel like we can fit it all in: picnics and swimming and puppet shows and berry picking and parades and the Farmer’s Market and the circus and- and- AND! Technically it’s just the beginning of August, but when I look at my calendar all I can see is a high-speed runway leading directly up to the first day of school.

But this year the summer to-do list includes a few new items: experimenting with recipes, cooking at home more than ever before and finding clever ways to avoid summer staples like store-bought ketchup, mayonnaise, and hamburger buns. (And don’t even get me started on the S’mores “kits” they sell in our supermarket… as if you need to be a rocket scientist to assemble the ingredients for S’mores.)

So the other day I answered a question that’s been bothering me since we began the No Sugar project: how important is sugar to a bread recipe? I’ve been a royal pain-in-the-tookas on this one, refusing bread in restaurants over the protestations of well-intentioned waitstaff that the amount contained therein was really, very, very small. Always, there was the implication that the bread simply couldn’t be made without the sugar. I wondered, was the sugar somehow necessary to proper yeast growth? How much better would bread made with sugar really be?

I set out to find out. Using my King Arthur Flour cookbook, I prepared two batches of bread dough: one adding the called-for tablespoon of sugar in the yeast-proofing stage, the other not. During the process of the rising, kneading and baking I became convinced the sugar-containing bread would win in a walk. The yeast looked bubblier, the dough rose better, the final loaf had a better browning on the crust.

But it was like the story of the tortoise and the hare… despite looking somewhat sad and anemic throughout the entire making and baking process, in the end I found that the no-sugar loaf caught up. By leaving it in the oven a few minutes longer I got the desired browning on the crust… the loaves looked indistinguishable. When I held a taste test composed of my family and some friends, two preferred the sugar-bread, one preferred the no-sugar bread, and one said they tasted the same. Clearly the difference was subtle. Can you make good bread without that tablespoon of sugar? Yes. 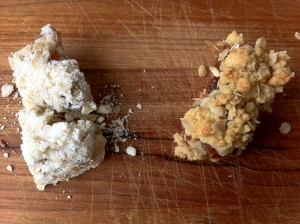 The Difference An Egg Can Make!

Then this week I returned to a snack/dessert recipe I’ve always loved: Apricot-Lemon-Date Bars. I had made these much earlier in the year, substituting banana for the brown sugar, which works fine, but results in a very banana-date-y taste which- if you sweeten everything with bananas and dates for a while, like I did- gets pretty monotonous after awhile. I returned to the recipe, this time armed with my giant container of dextrose. The first time through, however, was disappointing: making the recipe by simply substituting dextrose for brown sugar resulted in a pasty, overly crumbly mess of a bar, which tasted okay but didn’t hold together nicely and didn’t brown in an appealing way.

Back to the drawing board. Between the dextrose and the dried apricots and dates the bars were plenty sweet, but what would make the crust hold together better and brown better? I decided to try adding one egg to the crust and see what happened.

Now, this is kind of a big deal for me. As I’ve mentioned before, I’m a recipe follower; I’m very literal. I’m the kind of cook who waits the last ten seconds on the timer before dumping the pasta water out. Experimenting is entirely outside my comfort zone. However, I am living proof that being hungry and sweet-deprived will do wonders for one’s adventurousness in the kitchen.

You know what? It worked! The egg added just the right cohesiveness to make the crust crumbly rather than dusty, and the browning was perfect. They’re not just good- they’re really good! I am so proud of myself that it’s kind of ridiculous. You’d think I just invented the S’mores Kit.

In a saucepan combine dates, apricots, lemon juice and water. Cook covered, on low heat for 10 minutes, stirring occasionally. Remove from heat and set aside.

In a bowl, cream together the butter and dextrose. Add egg and continue to mix. Stir in flour, salt and baking soda. Finally, add the oats and mix with your hands. Press two-thirds of the crumbly dough into an oiled 8 or 9 inch square baking pan. Spread fruit mixture over the dough. Crumble remaining dough on top. Bake for 30 minutes. Cool in pan. Cut into bars.

You are currently reading A Year Of No Sugar: Post 63 at Eve O. Schaub.