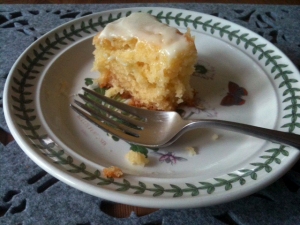 I’ve been experimenting with brownies, and no, not that kind. Sheesh. I’d really almost forgotten how much I LOVE to bake. Sure, once in a while I get to make our Monthly-Agreed-Upon-Sugar-Containing-Special-Treat… but that is like dispensing water to a goldfish with an eyedropper.

I miss everyday cookies. I miss after-school cakes. I miss just-because pies. I miss having something sweet for no particular special occasion at all. Is it really just the sugar? Or is it something more metaphorical than that?

I’m not sure. But now I have my elephantine-size jar of dextrose and the world of treats is opening up again. First, I made Strawberry Ricotta Cake– whose recipe is available at David Gillespie’s website howmuchsugar.com– and the angels sang. Then, last week I began playing around with brownies in the hopes of bringing something to my daughter’s fifth grade class that wouldn’t invoke any gag reflexes. I was shooting high- I didn’t want to fall back on banana-and-raisin cookies, which I imagined the kids- who haven’t yet learned how to be as aggressively polite as grown-ups- would be tentative and lukewarm about. I wanted something more dramatic than that… something that looked and tasted like something they’d choose for themselves… on purpose. Something they might actually be surprised to know contained no added sugar.

So of course I went a little overboard, baking three different batches in two days. Everyone in my house was delighted with the sudden flood of brownies and repeatedly being asked to (sigh!) taste them.

The first two batches came from David Gillespie’s website again, but this time from a paid subscription portion of the site, which is to say that if I gave you the recipe I’d have to kill you. That’s okay, because unlike the Ricotta Cake, I didn’t have lots of luck with the Chocolate Fudge Squares Recipe: they came out undercooked and pudding-y inside, and my attempts to bake them longer did result in a better brownie, but a tad cakey and dry.

For the third attempt I decided to be truly daring and improvise a dextrose version of my favorite King Arthur Flour brownie recipe- you can imagine my shock when it actually worked and they were quite good. As in: if-you-didn’t-know-it-was-a-dextrose-brownie-you’d-never-know-it-was-a-dextrose-brownie-good. I’ll post the recipe here. If you read the last post you know that the kids ate them up, no questions asked, nary a surreptitious napkin spitting in the bunch. I was so proud you’d have thought I invented a cure for Fruit Loops.

Most recently, I tried the other day another howmuchsugar subscription recipe: Coconut Cake. As you may recall, we have a coconut pudding cake recipe that is much beloved in our house, but has yet to make it onto our Desert Island Dessert list… so this seemed like a good next attempt.

And how. Seriously, the kids were so excited by the wonderful smell of baking coconut and warm cake they couldn’t wait for it to cool completely before attacking the top with spatulas full of dextrose-cream-cheese icing. It was a bit of a runny mess as a result, but boy was it good! And it was so nice to have this ordinary, everyday-feeling cake, without having to feel required to go crazy and make the Mona Lisa of desserts since it would be a-whole-nother thirty-some days to till we got to have another one.

So dextrose is starting to look a lot like our friend. I can’t lie to you and say the desserts which result from it are just as sweet as what our culture is used to: they’re decidedly not. At thirty percent sweetness of traditional table sugar, you basically can’t fit enough dextrose into most traditional recipes to achieve that level of sweet-iousity. To us, however, with our recalibrated taste buds, they taste plenty sweet, maybe even preferably so. We don’t have to feel quite so completely in denial of all things sweet-ish, which is lovely.

Now, we just have to work on the image problem: dextrose just sounds too clinical, too science-y. I don’t care how good they are, you won’t find “Dextrose Coconut Cake” on the menu of your favorite restaurant anytime soon, and “Glucose Coconut Cake” is even worse, like something astronauts might eat in space. So how about it people, suggestions?

You are currently reading A Year Of No Sugar: Post 55 at Eve O. Schaub.