Pods. You know them: those little packets that are supposed to save us from the arduous and soul-destroying task of having to actually measure liquid detergent. The horror. 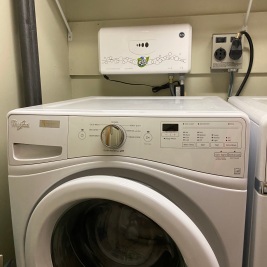 Instead we have a system called an EcoWasher. Essentially, this is an appliance the size of supermarket sheet cake. It attaches to the wall above your washing machine and magically makes your clothes clean.

At least this is how it was explained to me at the appliance store. What I heard was “You don’t have to buy laundry detergent anymore!” It also didn’t hurt that this supernatural contraption would pay for itself pretty quickly: the average American family spends $180 per year on laundry detergent; an EcoWasher costs $400. On top of that it only washes in cold, so you save the cost of heating the water; and depending who you ask that amounts to another $150-$300 savings per year.

We particularly liked the fact that we could get away from traditional detergents that contain harmful chemicals and fragrances- better for us, better for the environment. After all, if the average American household uses 5,600 gallons of water per year washing clothes, and there are roughly 130 million American households, this means that we have something like 728 billion gallons per year of petro-chemical-filled water flooding back into our waterways. Ick.

We were convinced. We got it home and hooked the panel up to our washing machine, and were amazed to find that it was true: our clothes somehow came out clean, using only cold water. How was this possible? I had no idea.

But inspired by those ads for eco-pods, I began to wonder- what was going on in my washing machine? So I looked into it. On EcoWasher’s website they explain that inside the flat panel our water goes through “ozone infusion” creating something called “Hydroxyl Radicals.” It is the Hydroxyl Radicals that attack the bacteria in clothes.

A little bit of knowledge is a dangerous thing. Up until now, I had just kind of blissfully accepted that my EcoWasher knew what it was doing and we left each other alone, but now that I had this modicum of information, complete with chemically-sounding words? I was made of questions:

Ozone infusion– is that okay?

Where does the ozone come from?

Does it get released? Is that good or bad?

All of this brought me to the $64,000 question: does infusing ozone and creating Hydroxyl Radicals in my washing machine do any damage to me, my family or to the environment?

Even as I wonder this a rational angel appears on my shoulder whispering “Oh Eve- don’t you think if this technology was creating a dangerous rip in the time-space continuum we’d have heard about it by now?” Not surprisingly, the conspiracy theorist angel on my other shoulder isn’t convinced. “Hey Eve, exactly how many things has civilization thought was a wonderful new idea, only to find out it was wonderfully harmful instead? Shall we count them?” The list is long.

In an attempt to get to the bottom of such questions I called EcoWasher. While I waited for them to call me back I watched a whole bunch of YouTube videos and read articles explaining ozone laundry technology. I found out that the EcoWasher is based on technology that has been used in hospitals and resorts for decades. I also found out that Hydroxyl Radicals are famous in the world of chemistry for acting like “nature’s detergent,” decomposing pollutants, and neutralizing viruses and bacteria. All this sounded pretty good.

But reputable sources agree: Hydroxyl Radicals are free radicals and are bad- at least when they are in our bodies. In the atmosphere, however, they turn into good guys, scrubbing the stratosphere like your grandmother’s linoleum floor. Chemistry is confusing this way: because it’s almost impossible to keep the good guys and bad guys straight when they keep shape shifting depending upon their context. On top of its Dr. Jekyll/Mr. Hyde personality, I learned that Hydroxyl Radicals have a life span of less than one second. Interestingly, this is why the water in your laundry needs to be cold: because warmer temperatures reduce the lifespan of the Hydroxyl Radicals, and they didn’t have that much to work with to begin with.

I concluded, Hydroxyl Radicals sounded a lot scarier than they really were. I figured as long as little suckers stay out of my body and in my washing machine for their short little one-second lives, I probably didn’t need to freak out about them very much.

You probably won’t be surprised to learn that once again the answer is “it depends!” Of course, when ozone is in the stratosphere, or upper atmosphere, it protects the earth from damaging UV rays. Most of us came to know this back in the 1980s when it was revealed that chlorofluorocarbons were creating a dangerous hole in this protective layer. So: ozone= good guy!

But put ozone in another context and everything changes. When ozone is present in the troposphere, or lower atmosphere, it becomes a greenhouse gas, trapping heat and warming the planet, not to mention causing problems for people with breathing disorders. Plus- and this blew my mind a little bit- did you know that ozone is just another kind of oxygen? It’s called an allotrope, meaning an element that takes different physical forms.

I’m not sure if my 11th grade chemistry teacher would be proud of me for figuring this much out, or sobbing softly into a hankie. Regardless, I felt pretty good about being able to cobble together a rudimentary understanding of what was otherwise just a bunch of scary-sounding science words.

To recap: ozone laundry systems take oxygen from the air and charge it with electricity, turning it into the form of oxygen known as ozone. Hydroxyl Radicals are then formed as a result of the reaction between the water and the ozone/oxygen. Then they do the good work of killing the bacteria makes our clothes smell, before dying a graceful death at the ripe old age of one second.

It sounds good, and I’m so glad because I really didn’t want to start buying detergent again. There are still a few things I wonder though: Where does the ozone go? Does it, too, degrade and basically disappear once its job is done, like the Hydroxyl Radicals? Also, I wonder how the Hydroxyl Radicals clean my clothes if they have such a short lifespan- is one second even enough time to get to my clothes?

And just for fun, I wonder: would this same technology work on a dishwasher as well? If not, why not? Cause I’d love to stop buying dish detergent too.

I’ve called EcoWasher several times with no response yet, so I’m going to wonder these last few mysteries a while longer. But I feel both empowered and reassured by understanding a bit better the science at work in this fascinating little box.

Post Script: I’m not being paid by EcoWasher to talk about their product- it is just the one we happen to have. I should point out that EcoWasher is just one of a variety of different such “Ozone Laundry Systems” on the market today- here is a link to a YouTube video that describes several of them.

You are currently reading Demystifying My Magical Washing Machine at Eve O. Schaub.