It was fortuitous, I thought, that Annie mentioned that they were going to be “processing” (the appropriate euphemism) their 52 meat birds the following weekend. So I asked what, for me, was the next logical question: “Can I come?”

Annie left the decision up to Randy. Randy is Annie’s husband, and the one who does the majority of the processing on the appointed day. We’ve been lucky enough to become great friends with both Randy and Annie ever since we met them last summer at the pre-K picnic and discovered that our then-four-now-five year-old daughters shared the same birthday.

A few days later I caught up with Randy, but at first he seemed a little tentative.

“If you don’t mind my asking,” he said, “Why do you want to do this?” Funny- my husband asked me much the same question, and with a very odd look on his face too, come to think of it. Was it that bizarre a request? I wondered. It wasn’t as if I had proposed we take a school field trip to the local funeral parlor or anything (my husband actually did that as a child. Fun! Is this where they keep the embalming fluid, Mister?) I mean, honestly, how bad could it really be? Was there something I was missing, here?

Would slimy chicken parts be flying everywhere? Blood spurting cartoon-fashion in every direction? Would I beat a hasty retreat back to vegetarianism, ruined forever-after for any appreciation of fine poultry? Would I sob uncontrollably/ be scarred for life/ suffer terrible, flailing-chicken nightmares? Would I (and this was important) lose my lunch? 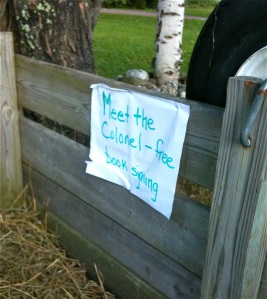 It is definitely interesting to see the spectrum of reactions one gets in this day and age- even in Vermont- to the idea of voluntarily killing a defenseless animal. Hunting, of course, is a similar such topic and the few hunters we know are noticeably shy on the topic, feeling out whether the person they are speaking to will respond to a hunting story with sincere enthusiasm or wide-eyed horror.

Perhaps then, raising birds for meat and dispatching them methodically holds even more potential revulsion. I mean, at least the deer had a fighting chance, right? After generations of being bred to be docile, sedentary and fat, the meat bird is… how shall I say this politely? None too bright. There ain’t no “fight or flight” going on here, people. Mostly it’s just “sit and stare.”

As for myself, after a long journey that included two full decades of vegetarianism of virtually every conceivable shade and hue, I’ve now come around to the point where this ancient arrangement between animal and farmer no longer strikes me as anything but sensible. Beyond sensible, it is the kindest of all the available options, and kindness and respect for animals is what always motivated my meat-free days in the first place.

But back to the farm. After Randy agreed to call me when he was down to the last batch of chickens late Sunday afternoon, I cleaned the kitchen and waited for the phone to ring. It was a weird feeling, this aimless waiting, as if a baby was about to be born, when in fact, it was really quite the opposite situation. Then again, I thought, something is being born today: food. Healthy, organic, sustainable food. Real food- not that ersatz stuff they try to pass off as food at the gas station or even the supermarket, but the real McCoy, the way our ancestors knew it for generations. Food that is the result of your own work, by your own hands, that doesn’t attempt to deny or obscure the essence of what it is: a dead animal.

I’m starting to think that the more honest we are about this, the better. The factory farm industry is more than happy to take advantage of our modern squeamishness and our collective cultural agreement to suspend our disbelief (we know it is a dead animal- bu-u-u-u-t let’s pretend it’s not!) If you haven’t been, let’s just say there’s a really good reason they don’t have school field trips to chicken farms. (Pretty much the same reason they don’t have school field trips to funeral parlors: too many nightmares.) In the interest of the all-important bottom line Big Food systematically tortures, drugs, and abuses meat animals, acting as if they weren’t living beings at all, but mere products, like toasters or Tic-Tacs. In so doing they are not only behaving in a morally bankrupt fashion toward our fellow living beings, but they are putting at great risk the health and safety of the customers who ultimately will eat these animals as well. And that’s us.

When the call finally came I dropped everything and raced over to Randy and Annie’s afraid I’d arrive too late for the sending up of the final four. But I was right on time and Randy was calm, tired and sweaty after a day that had started at six in the morning and wouldn’t end till six that night. He wore a yellow rubber apron and giant black rubber boots and looked every bit the part of a man who’d been sending chickens to meet their maker all day, all for the sake of a healthy, sustainable diet for his family.

After drinking a tall glass of iced tea he drove the tractor down to the coop where the chickens had lived the entirety of their ten-week lives. For only ten weeks old they looked enormous: eight pounders most of them, with beady, wild eyes and muddy, reptilian three-toed feet. One by one Randy escorted the last four into the pull-behind where— using his best black sense of humor to diffuse the tenor of the day— he had installed a handwritten sign reading: “Meet the Colonel- book signing today!” Then off we drove to the killing cones.

Killing cones are a little like upside-down traffic cones, except they are made of metal. They hang from a framework, as does a flexible wire which is used to wrap the bird feet, subduing it and reducing struggling. The day was searingly hot and the flies buzzed about the blood which had already stained the dirt underneath each cone. After Randy slit the throat of the first bird I was greatly relieved. I could do this: no crying, no lost lunch, no fainting. Phew. I was astounded to realize I was actually completely fine. Slowly, the blood drained out of the bird and you could almost pinpoint the moment when the bird ceased it’s struggle and life simply left- almost evaporated. It was perhaps the quietest, most peaceful death a chicken could hope for, really.

Then Randy asked me something I hadn’t expected: “Do you want to do one?” Oh. Hmmm. Well… Why not? I mean, who knows when will I ever get this chance again, right? And that is how I came to be the last earthly friend of chicken number 52.

The first time I slid the knife across it’s gnarly little neck, I knew immediately it hadn’t gone deep enough. Panicking, and quite sure I was going to end up torturing and/or mutilating this poor creature, I quickly slid it again with greater force, as if I were slicing a nice roast. This was better, if not perfect, and the blood began to stream down the way I had seen the other chickens’ do. Hanging there in its aluminum cone, it took only a minute or two to “bleed out.”

I wondered why I wasn’t upset. I wondered if I should be worried about the fact that I wasn’t upset. (I’m a monster! A conscious-less chicken murderer!) Meanwhile, Randy was pulling the muddier feathers off the already deceased birds and laying them back in the pull-behind, while I watched #52 intently. After some moderate flailing, he (she?) curled it’s head up suddenly in a question mark shape, staring directly at me (or so I thought.) I imagined a quizzical look in its eyes that surely was not actually there and then- as if a switch had been flipped, its mouth yawned open at the same time as its neck relaxed; a white film came down over the chicken’s beady eye. Even a neophyte like me could instantly recognize the aspect of death- and respect it- even in the silly, awkward end of a chicken.

After Randy kills the chickens, there’s still a fairly elaborate process to go through: he scalds them in 180 degree water (loosening the feathers), runs them through the feather picker, (a Dead-Chicken-Tilt-A-Whirl!) spinning the chicken bodies around in a rather startling, clumsy fashion while black rubber nodules remove most of the hard-to-pluck feathers. Then, on a carefully bleached counter, he eviscerates the bird, snipping off the head, feet, the “scent gland” above the tail, and then removing the internal organs one by one (intestines, liver, heart, windpipe and lungs.)

Once again, Randy let me try my hand at the procedure, and anyone who knows me pretty well will need to be revived after hearing that I eviscerated two still-warm bird bodies with Randy’s helpful direction. I’m not sure why, but all my normal meat-squeamishness disappeared… just because I eat meat these days doesn’t mean I have the slightest clue about handling meat in the kitchen. In fact, just the opposite: all those meat-free years have left me completely unprepared for that weird little bag inside the turkey cavity at Thanksgiving, and my Mom would very much like a dime for every time I’ve called her with a meat question, thank you. (Do you think it’s okay? Do you think it’s done? Do you think I should just give up and go back to living on bagels, french fries and nachos?) Perhaps it was the beginning-to-end nature of the process. Perhaps it was the fact that Randy helpfully talked me through each one, lung-scraping and all. Perhaps I was just too fascinated by the fact that yes, each bird body was exactly the same on the inside! Yup- there’s the heart- right in the same place as the last one! I was struck by the amazing predictability of biology. Is this how surgeons come to see people, I wondered, as different outwardly, perhaps, but basically just identical walking amalgamations of organs? Yup- there’s the heart- right in the same place as the last one.

I guess you end up thinking some odd things while pulling the organs out of a chicken.

Finally the bird is dunked in a spring-water bath to cool. Here they await the arrival of Annie on the scene to remove them from the bath, blot them inside and out with paper towels, and carefully wrap them for storage in the freezer. And you know what? It looks like chicken.

Fifty-two chickens: fifty-two weeks. Randy and Annie now have a freezer full of the finest quality organic meat that will last them for an entire year. They know where it came from, they know what it’s eaten, what it was treated like, and how it died. They have taken responsibility, on a very basic level, for their food.

It surely isn’t for everyone. But it was nice for me, at the very least, to spend and hour or two acknowledging where all that chicken we eat actually comes from… a silly, awkward animal, that still deserves our kindness, and respect.

You are currently reading Me and Chicken # 52 at Eve O. Schaub.