A Car is Never Just A Car

Several weeks ago my beloved but well-worn Subaru had a nervous breakdown. Ever since I’ve been faced with choosing one of three options: 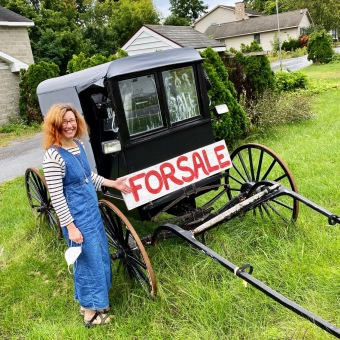 I am only half kidding about this.

Ever since this realization sank in I’ve been stuck, both literally and figuratively. I work at home and there’s a pandemic going on, so there hasn’t been a lot of pressure to resolve the dilemma: there’s just nowhere all that pressing for me to go. So my Subaru has sat in the garage, patiently waiting.

Like all of us, I was raised with a whole bunch of cultural expectations about cars, and for me one of them was that every able-bodied driver in the household has their own car.

A car is never just a car. It’s feminism. Or independence. Or adulthood. A flashy car is youth, or youth regained. An expensive car is an assertion of class or success.

Only a few short decades ago one-car households were the norm. A spouse could drop off the commuter at the train station or the bus stop in order to “have the car for the day.” Today a combination of factors- higher costs of living requiring two incomes and poor public transportation systems among them- have lead to new norms.

Recently I spoke with my friend Rhonda on this topic, because for the last 16 years her family has had one car. In fact, she and her husband are the only adults I know in this community who don’t have “her own” and “his own” car. They have one car, and they share it. She says this revelation is sometime is met with puzzlement.

She likens the cultural expectation of multiple car households to that of neatly maintained grass lawns.

“There’s no reason to have all that grass,” she says. “But it’s just what people are used to.” Of course, she points out, the fact that she works at home makes having one car possible. Were she and her husband to both work outside the home, two cars would probably have been essential.

“We always said that if at any time it got uncomfortable we could decide to revisit the question,” Rhonda says. The decision for them was primarily environmental. “I just feel like our footprint on the planet as Americans is disproportionate already.”

And for me, that’s just it. Technically, my car doesn’t figure in to the Year of No Garbage project, because my car doesn’t generate the kind of garbage you can see. On the other hand, I think it would be near impossible to go for months on end thinking about the impact of humans on the environment and never stop to reconsider one’s mode of transport. According to the EPA, transportation was the number one U.S. contributor to greenhouse gas emissions in 2018. That fact alone should give everyone who owns a fossil-fuel burning car pause.

I’ve enjoyed the last few carless weeks, actually. Being a hermit has its charms, especially for a writer. Back when we each had our own functioning cars, my husband and I were never compelled to strategize who was going where, when. We just went. I think sometimes modern life encourages us to move so quickly that it can be destructive, not just of our environment, but of intangibles such as contentment, and creativity; do I really need to run out to buy just one thing at the store? Or could I better spend that half hour doing something else? In the last few weeks I’ve really liked being more conscious about our travel than that. I feel… more responsible.

But today I am taking my car in to the shop at last- having decided on option number one after all: fix it. I’m a little sad about losing that sense of interdependence- which we should have all the time but don’t, yet I’m also happy to regain some of my independence as well.

Soon my fifteen year old will be driving and the equation will shift yet again. Maybe by then I’ll have traded my Outback for an electric car. Or a horse-drawn carriage.

You are currently reading A Car is Never Just A Car at Eve O. Schaub.