So here we are on the plane coming home from our family trip to Italy, and I’m not at all sure how to feel about the way No Sugar went over the last two weeks. On the one hand, you could say we did really well… we drank cappuccino while everyone around us had gelato. We drank water, water and more water. When we met up with relatives and extended family in Northern Italy they were kind enough to make special requests for us at restaurants and to engineer no-sugar versions of things like Barbecue Sauce for us when we ate in. We held fast to our individual exceptions and steered clear of so many fun European treats we would’ve loved to have: Nutella, flavored yogurts, those funny little snack cookies that Europeans do so well. We looked the other way when passing elaborate shop windows filled with pyramids of chocolate truffles, fancy meringues and exotic looking candies. 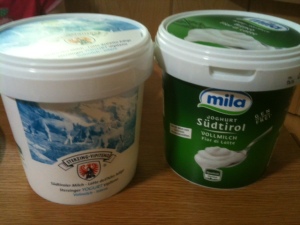 Can You Guess Which Yogurt Has Sugar??

And, as I mentioned before, sugar is easier to separate out in a place like Italy, easier to spot than in America where its presence is so much more insidious and pervasive. It’s true that ordering water instead of soda is actually considered a respectable option in Europe, whereas in America it’s somehow slightly looked down upon as slightly odd or cheap. (“Oh, you’re just having water?”) And sure, I was well supplied with my big bag of Snacks For Emergencies including Larabars, coconut cookies and any fruit we managed to pick up along the way… not to mention that we guiltily threw away more sugar than I care to think about: complimentary Swiss chocolate bars, Italian Baci, a large tub of “Tiramisu” ice cream.

Yet, like some sort of mutant slime from a cheesy horror movie, I kept feeling sugar creeping back in... around the ancient marble door frames and through the windows’ bulky wooden shutters, following us like shadows along the tourist-jammed streets. Small things, mostly. Once, Steve accidentally came home from the supermarket with a large vanilla yogurt rather than plain. Once, while staying the night in a B&B I put granola on my plain yogurt in desperation to avoid the Nutella and sweet yellow cake that constituted my other breakfast options, all the while looking the other way while my kids ate Cornflakes. (Cornflakes! Horrors!) Once, in a cafeteria across the street from the Duomo, we picked out what we thought were strawberries and yogurts for the girls’ snack, only to discover all that white stuff was whipped cream… not yogurt. Once, while having our unsweetened cappuccinos for a snack, we were sufficiently crazed with peckishness that we ate the hard little gingerbread cookies that had thoughtfully been placed on the saucers. Yes, these are the things that keep me up at night: whipped cream ambushes and postage-stamp-sized complimentary cookies.

Then again, other things are bigger. Twice our whole family succumbed to the siren song of gelato- (only once, in my opinion was worth it: peach, with little bits of skin throughout.) With an average of 95 degrees each day in Florence, and an average of fourteen tourists slurping a cone for every ten you passed on the street, keeping it to only twice was quite the superhuman effort.

Once, I heard our affable waitress describe the Tiramisu dessert as “buonissima” and I- swept away by the joy of a delicious meal and the fact that I was understanding far more of the Italian conversation than I had expected to- impulsively ordered two for the girls… only to have it not be all that “buonissima” after all. Phoo.

Once, we partook of thin slivers of a delicious Crostata Ciocolatta which was the birthday dessert of our now eight-year-old cousin whose family we met up with in Northern Italy. This was in the Dolomites, an alpine region of Italy so far to the North that prior to World War One it was part of Austria… and, as it turns out, a very dangerous place in which to send my husband off to the bakery. The first time he found the bakery as if in a trance, wafted in on the scent of a fresh apple strudel, which he promptly bought- helplessly- only to then give away to the extended family we had met up with. The second time he came home with a combination of sweet and not-sweet pastry, and by the third time he was arriving home with little marzipan hedgehogs and delicately wrapped bars of chocolate embedded with animal crackers or hazelnuts. I knew we had to get out of there, quick.

Nonetheless, it’s worth noting that none of these “sweet” treats, when tried, yielded that sugar blast Americans are so fond of… While an apple strudel or chocolate pie in the United States wouldn’t be considered worth it’s salt if it failed to make your teeth ache, the things we tried in bites here and there truly surprised us: apple strudel actually tasted like apples; the chocolate pie tasted of pastry and cream. No explosion of sweet; no King Kong-sized portions. When we saw a Ben & Jerry’s in Florence, I wondered what the Italians thought of flavors like Chocolate-Chip-Cookie-Dough Ice Cream and Phish Food (doesn’t that have caramel and gummy bears in it?), when juxtaposed with the elegant subtlety of a, say, peach gelato? Do they think we’ve completely lost our minds?

Back in Florence, on the last night, after very kindly being served complimentary biscotti as we tried to pay the dinner bill (help!) Steve and the girls had a goodbye treat of yet another gelato (that’s three, for those keeping score) while I abstained. By that time I could feel the ground moving beneath me. I agonized as I packed my suitcase. We had had so much more sugar here than we would have at home, yet so very much less than we would have had if not for The Project… What did that mean? Had we been good? Or not so good? Both, I imagine. In fact, I suppose the answer was that we were human.

Oh, and yes, we had a great time… thank you. Of course, most vacations, no matter how much fun, have to end. Lucky for us.

You are currently reading A Year Of No Sugar: Post 61 at Eve O. Schaub.